To compete in one sport in college is a privilege by itself, but to compete in three sports at Nebraska Wesleyan University has truly been an honor for me.

As an active member of the cross-country, swimming, and track & field teams at Nebraska Wesleyan, I have had the chance to compete with thousands of athletes from hundreds of universities across the United States. I get to proudly represent our university almost every other weekend in some competition, and each race is an incredible experience. Whether competing in a grueling five-mile cross-country race through the woods, an intense 5K race around the track, or a tough mile-long swim through the pool, I cherish every moment of the unique opportunity I’ve been given to compete on three different rosters at one university.

Long before searching for a college, I had developed an attachment to a multi-sport athletic experience. At age 11, I competed in my first triathlon, an event where competitors must swim, bike, and run in one continuous race. It forced me into a rigorous multi-sport training regimen at a fairly young age, developing every muscle in my body and strengthening my endurance each day. Entering high school, I wanted to continue to develop as a multi-sport athlete to become a better triathlete. However, triathlon is not a high school sport in Omaha, Nebraska, where I grew up. So, I decided to join the cross-country, swimming, and track & field teams at my high school, and it was the best decision I ever made. I worked with dozens of coaches, competed all around Nebraska, and worked each season to become the best version of myself. 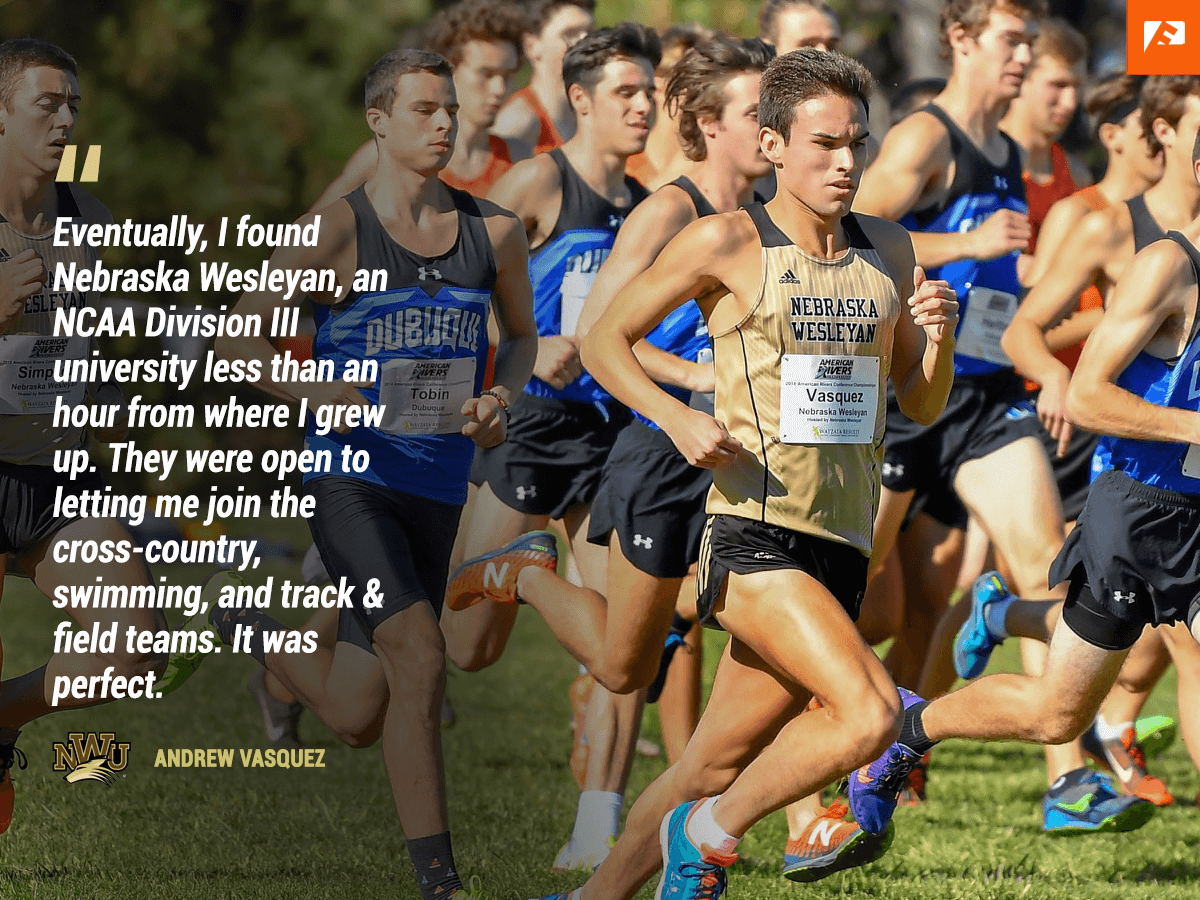 Toward the end of high school, I realized I wanted to continue this competitive three-sport experience in college. I couldn’t imagine giving up any of those sports for which I had spent endless hours training and racing. However, I had seen very few athletes complete this unique triple at the collegiate level. As I sought out universities for which to compete, several coaches saw a three-sport athlete as too risky due to its rarity. Eventually, I found Nebraska Wesleyan, an NCAA Division III university, located less than an hour from where I grew up. They were open to letting me join the cross-country, swimming, and track & field teams. It was perfect. Additionally, they gave me some freedom in structuring my training to balance the three-sport combination.

My typical week of training features numerous runs and swims. During the cross-country season, I run about 50 miles each week, averaging roughly 8 miles per day. Additionally, I swim 3-4 times a week during the cross-country season, averaging about 10,000 yards in the water weekly. Once cross-country season ends in November, I work back up to swimming about 25,000 yards per week in preparation for the big winter swim meets, and I let my legs recover from the cross-country mileage. In January and February, I swim about 8 times per week, and I gradually start to reintroduce running into the training regimen. The swimming season ends in February, and I let my arms recover while I work the running mileage back up toward 40 miles per week for the track season. The ebbs and flows of the running and swimming mileage help me stay focused during training and avoid burning out physically or mentally. Furthermore, the race schedule is designed to give me an exciting race that is always right around the corner. 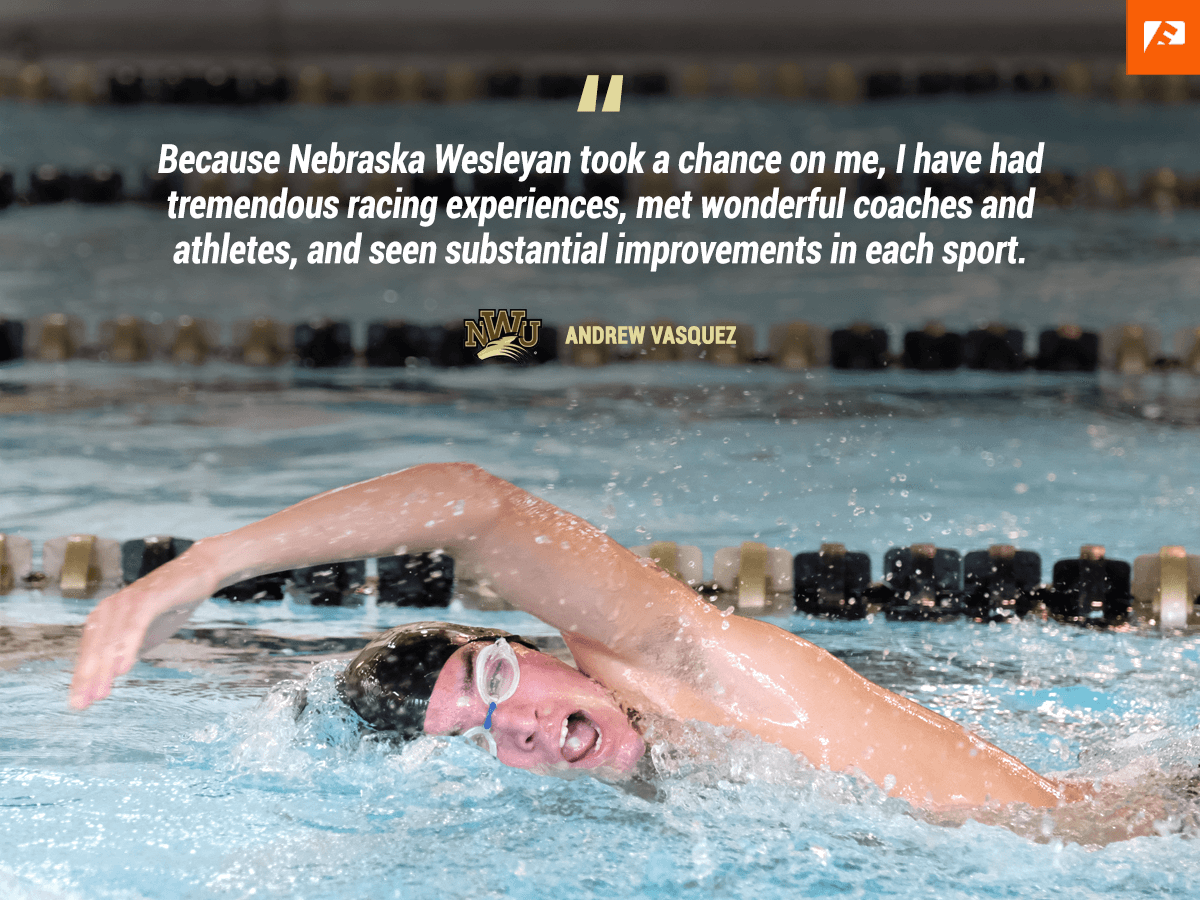 Ultimately, the opportunities Nebraska Wesleyan has provided me to continue doing the sports I love while pursuing my accounting degree have allowed me to see improvement in every sport. I have achieved heights I never thought possible, including an NCAA national medal performance in cross country, and a national medal performance in triathlon outside of college as well. Several teammates I had when I was younger chose to forgo their sports in college to focus on their studies; however, competing for Nebraska Wesleyan has enhanced my studies. Performing well in the classroom requires a structured studying routine and a disciplined work-ethic just like training for cross-country, swimming, and track. Because Nebraska Wesleyan took a chance on me, I have had tremendous racing experiences, met wonderful coaches and athletes, and seen substantial improvements in each sport.

In the time I have remaining in college, I will run and swim proudly knowing that Nebraska Wesleyan has graciously helped make me the national, collegiate, multi-sport athlete I always hoped I could be.

Next year when I finish my accounting degree and complete my collegiate athletic career, multiple unique experiences lie ahead for me. Nebraska Wesleyan helped show me where I can use my degree along with the value of making professional connections. For example, the university helped me obtain an internship this summer at the Omaha Branch of the Federal Reserve Bank. There, I will participate with the Federal Reserve‘s employees on bank examinations and present the findings to management. Additionally, since I have invested time into a multi-sport experience, I plan to continue competing in triathlons and race to obtain a professional triathlon license during the summer following my graduation. This license would allow me to compete against other professional triathletes in many incredible places all around the world. My time competing for and studying at Nebraska Wesleyan has been an absolute privilege, and I feel prepared and enthusiastic for the many doors it has opened for me in the future.