The Magic of Being a Student-Athlete

There is a lot of magic in college athletics. In three years of playing college tennis for the University of Memphis, I have already had the opportunity to live through a lot of magical moments.

The Fascination Of College Sports

The whole concept of collegiate sports is something special, especially to Europeans. Attending University in Germany while continuing to aspire to become a professional athlete is a hard task. Also, while there are sports teams at the higher-ed level, those can not even be remotely compared to any of the American ones. Fortunately for me, Americans love sports.

They have found a way for athletes to follow their dreams, play their favorite sports at a high, competitive level, yet work towards a degree. But not only that, due to the competitiveness of any of these sports, it generates enormous pride to play for the school which attracts many fans. A college match against another school is not just a meaningless event. There is a lot on the line every single time the team steps out on the court. That is what makes college athletics so magical.

A perfect example for that was a match in my freshman year against the University of Mississippi, more commonly known as Ole Miss. Ole Miss is known for their high standards of athletics and is part of the Southeastern Conference (SEC) which is possibly THE conference when it comes to athletics.

Ole Miss is only a 45-minute drive from the University of Memphis. Right around the corner, according to Americans. (note: A seven-hour car ride here in the US is not necessarily considered a long drive). As you can imagine, when two colleges are that closely located to each other, a rivalry is unavoidable.

The match was played at their facility and several hundred people were in attendance, both from Oxford and Memphis. Not only did we win the match 4-1, but I was also the one to earn the deciding 4th point. It was a win that the whole city celebrated. The memory of hitting an ace on match point will forever stick with me. After all, it is memories like this one that keep me motivated and excited to continue to work hard on and off the court. 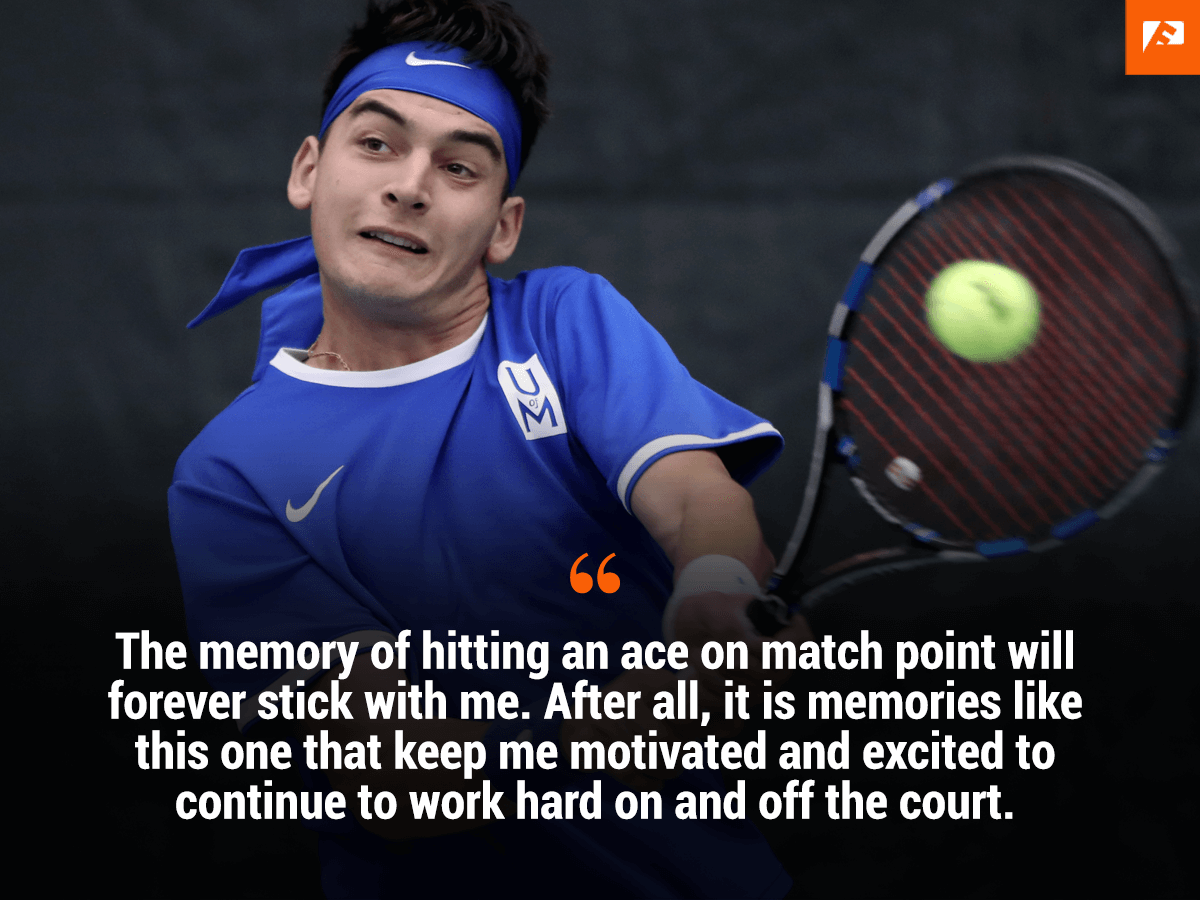 I guess, I have always had a small advantage though because not only do I play tennis, I am also a magician. I started when I was just a young boy and my parents bought me one of those “magic sets”.

It was not until I was about 15 years old and saw a magician use magic to get a girl’s phone number that it started to really fascinate me. I realized that magic could help me break the ice with people. I have always been an outgoing person that loves to socialize, but in that video, I saw an opportunity to make people, and even strangers, happy and surprise them; even if it was just for a few seconds.

That was the moment I chose to dive deeper into the world of magic and away from the little tricks I learned as a kid. I wanted to learn about the well-kept secrets of magicians.

I would like to stop at this point to give a shout-out to my mom and dad. Not only have they pushed me to always pursue my athletic and academic goals, but they are also the ones financing the whole magic journey. Because, let me tell you, these magic books are not very cheap.

I would also like to apologize to my former high school classmates, as they were the ones who had to see all of my tricks, even when they were bad. But just as it is with any craft, practice makes perfect. I slowly became more and more confident in performing my magic tricks.

When performing magic, confidence is key. As a performer, I need to be one hundred percent certain that I am capable of doing the trick correctly. And with that confidence, the trick becomes even better, it becomes more convincing.

I continued doing magic as I moved across the globe to study at the University of Memphis . It might seem a bit weird to carry a deck of cards with me wherever I go, but it is an easy form of entertainment. It has helped me make new friendships and allowed me to make a name for myself amongst the athletes.

Once a year, the University of Memphis hosts a banquet called the Pawscars for its athletes. I was asked to perform magic there my sophomore year and was invited back to even host it my junior year. Standing in front of all of my fellow athletes and being able to put a smile on their faces will forever be a highlight of my collegiate career.

Having done magic intensively for five years is not a long time. But the more I dive into it, the more secrets I uncover. Besides the YouTube magician with the magic powers to get a girl’s number, there have been a lot of people influencing me on my path.

Of course, the infamous David Blaine or Penn and Teller come to mind (I am an especially big fan of Penn). But there are a lot of highly talented magicians I have actively learned from by studying their material, like Daniel Madison, Justin Miller, Daniel Chard, Geraint Clarke and Peter McKinnon, just to name a few. Doing magic has changed my life and these men have had such a huge impact on it.

The Impact of Magic on Tennis

Doing magic has not made my forehand better, my serve faster, or my footwork quicker, but it has shaped my character. It has allowed me to understand people, learn what fools them, what doesn’t, and how they respond to certain things. It has also allowed me to deal with difficult situations when things do not go as planned. I am far from being a great magician, I still mess things up. And tennis is a sport full of mistakes. A few per game. A lot per match.

Doing magic has allowed me to better deal with those mistakes though. I have also always been a very happy person, trying to smile as often as possible, which is why I try to incorporate comedy into my acts. Not always successfully, though. At the same time, I am trying to portray the same person on court as well. It may be hard sometimes, as things do not always go as planned, but a positive attitude will always help.

The Beauty of College Tennis

College tennis is a lot different from regular tennis. An individual sport was turned into a team sport. The crowds are loud and wild. It’s a fast-paced game. It is something special. And also, something that will never come back. As athletes, we are allowed to play four full seasons. Once we graduate, it is over. We try to cherish every moment; even the tough ones. I cannot tell you how much tennis has impacted my life. It has made me who I am today. I don’t even recall a life without tennis, to be honest.

However, I can certainly tell you how collegiate tennis has changed it. I became more independent and proud of who I am as a person and what I work for. A word that describes Memphis and Memphians is “grind”. Our conference is often overlooked and we have to grind for everything. Nothing is given. We all are learning life lessons here which we will take with us post-college.

I am incredibly thankful for that and everything the city has given me.

A stage to prove myself to be a good tennis player. A platform to express myself as a magician. There are too many people to thank individually, but first and foremost, my family, who have supported me from the very beginning. The University of Memphis staff and especially the coaches that recruited me, dealt with me, trusted in me, and made me a better tennis player and person in general. My teammates, who are like family to me. Just like brothers, we don’t always have to get along, but we are always there for one another. The fans who stand behind all of us and keep us going. All of the individuals that mentor us and help us navigate through our college lives. And finally, all the people from Memphis who have taught me how to grind and work for everything I want. German born, but Memphis made.

… just as I am trying to give people a magical moment, so are all the other collegiate sports as well. Experience them all. From football and basketball to tennis, golf and rifle. They will all excite you. They will make you proud of your university.

Nothing makes me prouder than being a Memphis Tiger. And that is truly magical to me.

Thank you to the Memphis Tigers and photographers Joe Murphy and Ben Solomon for allowing us to use their pictures.