Athletes dream of having long careers and leaving the game on their terms. Unfortunately, my career, like so many other professional athletes, was derailed by injury and other circumstances that were beyond my control.

I was first called up to the Major Leagues in 2008. After a few years of back and forth between AAA and the big league for the Detroit Tigers and the Oakland A’s, I found myself in 2010 playing AAA once again, only this time, it was for the Philadelphia Phillies. This season would prove to be the most life-altering and challenging of my life.

The season started out like all the others I had played. Historically, I would play well in the first half but really shine in the back end of the season. I was doing well; my stats were looking good, and I was feeling confident I would put up great numbers and once again get called back up to play in the Majors. Sadly, I would never get the chance to play the second half of the season.

I will never forget the day. It was the first game back after the All-Star break. I was excited for the second half of the season to start. It was my second at-bat, and I was on second base. What happened next was one of the most painful experiences of my life, both physically and mentally. I took my lead off second base. The pitcher delivered the ball towards home plate. The moment I saw the ball hit the bat I knew it was going to be a hit to left field. I took an aggressive turn as I headed to third. I could see my manager waiving me home. I knew the ball was hit too hard for me to score, but I followed his instruction anyway. I approached home with the intent of colliding with the catcher in an attempt to knock the ball out of his glove and be safe. As I was closing in, I saw the throw take the catcher to his left. That forced me to make a last-second move to avoid his tag. In doing so, I passed the plate. I tried to stop myself and go back to touch it, but as I did, my right cleat got caught in the dirt.

As if in the movies, everything started to move in slow motion. I felt myself going down and thought, “Get your foot out from under you.” I wasn’t able to. 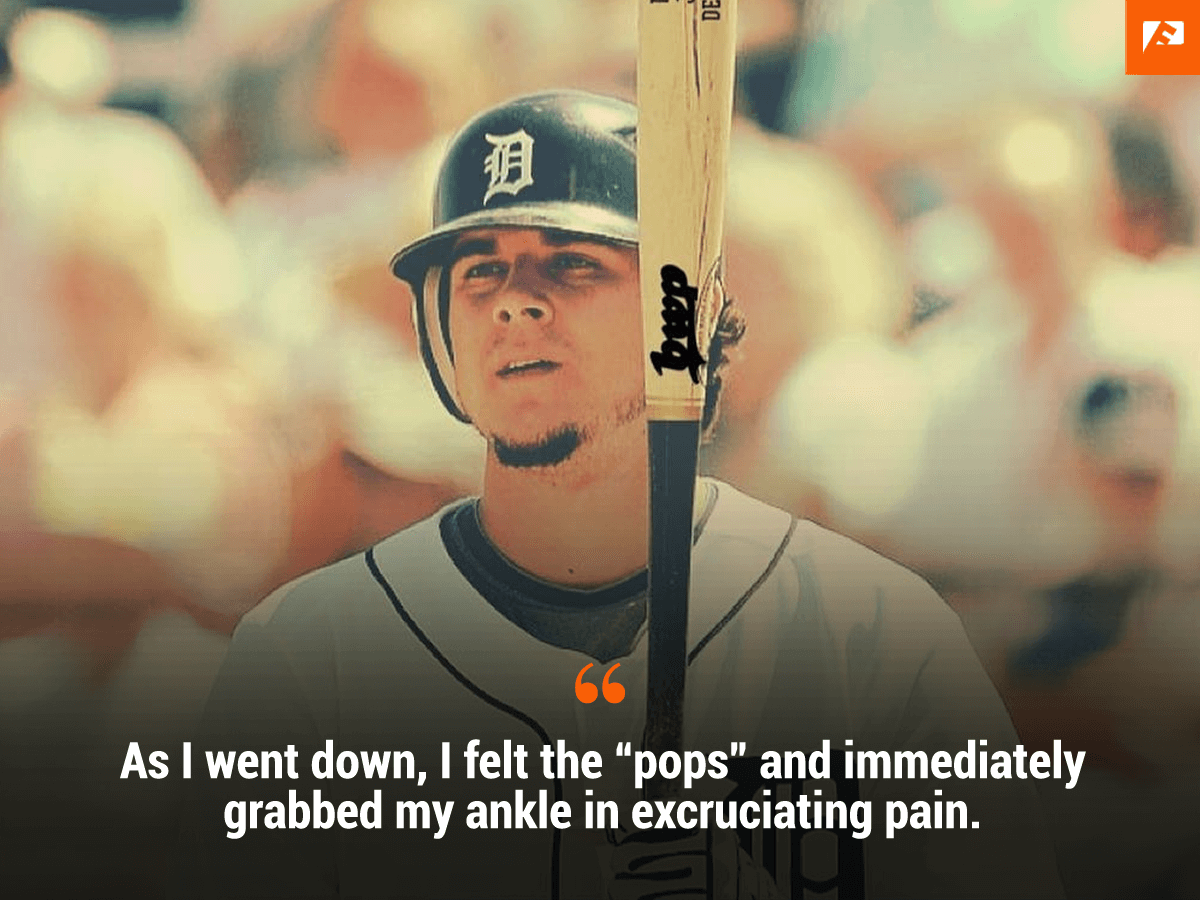 As I went down, I felt the “pops” and immediately grabbed my ankle in excruciating pain. My fibula was broken clean through, and I tore all the ligaments in my ankle. The repair would require surgery to insert a plate and seven screws, as well as a “tightrope” that would form a figure eight around my tibia and fibula to allow the ligaments to heal properly. I was told this would be a 12-month recovery. My season was done, and I was devastated. This ruined my chances of finishing the year the way I was capable of.

A 12-month recovery was not something I was willing to hear. I was stubborn, I was determined to come back, and despite what I was told, I attempted to return after just seven months. That turned out to be a terrible mistake.

After the injury, the Phillies released me. I needed to work. I had a wife and a baby on the way. When the Baltimore Orioles offered to sign me and send me to Spring Training, I accepted. I was in denial about the fact that I was not fully healed and in no shape to perform at the level I needed to. I told myself my ankle would eventually feel better. Due to the extent of the injury, it was extremely difficult for my ankle to handle the impact and torque of each movement. I found myself hesitant to go 100 percent because of the pain. My performance suffered dramatically, and I was released from the Orioles after the spring.

I went through a stint with the Boston Red Sox, who then traded me to the Pittsburgh Pirates where I would play AAA. The time at the Pirates was tumultuous, and eventually, I was released in August of 2013. There were no offers, no interest, and I had to realize that I may never play professional baseball again. My frustration and devastation were made worse by the knowledge of what I could do if I were healthy. This situation led me down a dark path. I spent nine months depressed and anxious about what I was going to do next.

The only thing I ever wanted to do was play baseball. That was what my identity was tied to. I appreciated every moment, and I did not take it for granted, so why was this happening to me?

Playing in the MLB allowed me to live my dream. Then it was viciously ripped away. Not only was baseball taken from me, but my wife and I were forced to sell our house after recently having our first child. As a man, one of the scariest things to deal with is not knowing how you’re going to provide for your family.

I finally realized I had a decision to make. I could continue to dig myself deeper and deeper into depression, or I could pick myself up and find a way to use my experience and knowledge to help others.

Since my playing days ended, I opened Dead Red Conditioning, where we dedicate ourselves to helping athletes enhance their performance and reduce their injury risk by identifying goals and developing a specific plan to achieve them.

I have found the majority of players go into playing their sport pretty blind. They know results they must attain, but do not understand exactly how to get that success consistently. They have a love for the game and maybe some natural talent, but then all they do is show up to practice, do what their coach says, and hope they make it to their final destination. It’s amazing how few have a plan of how to get there. 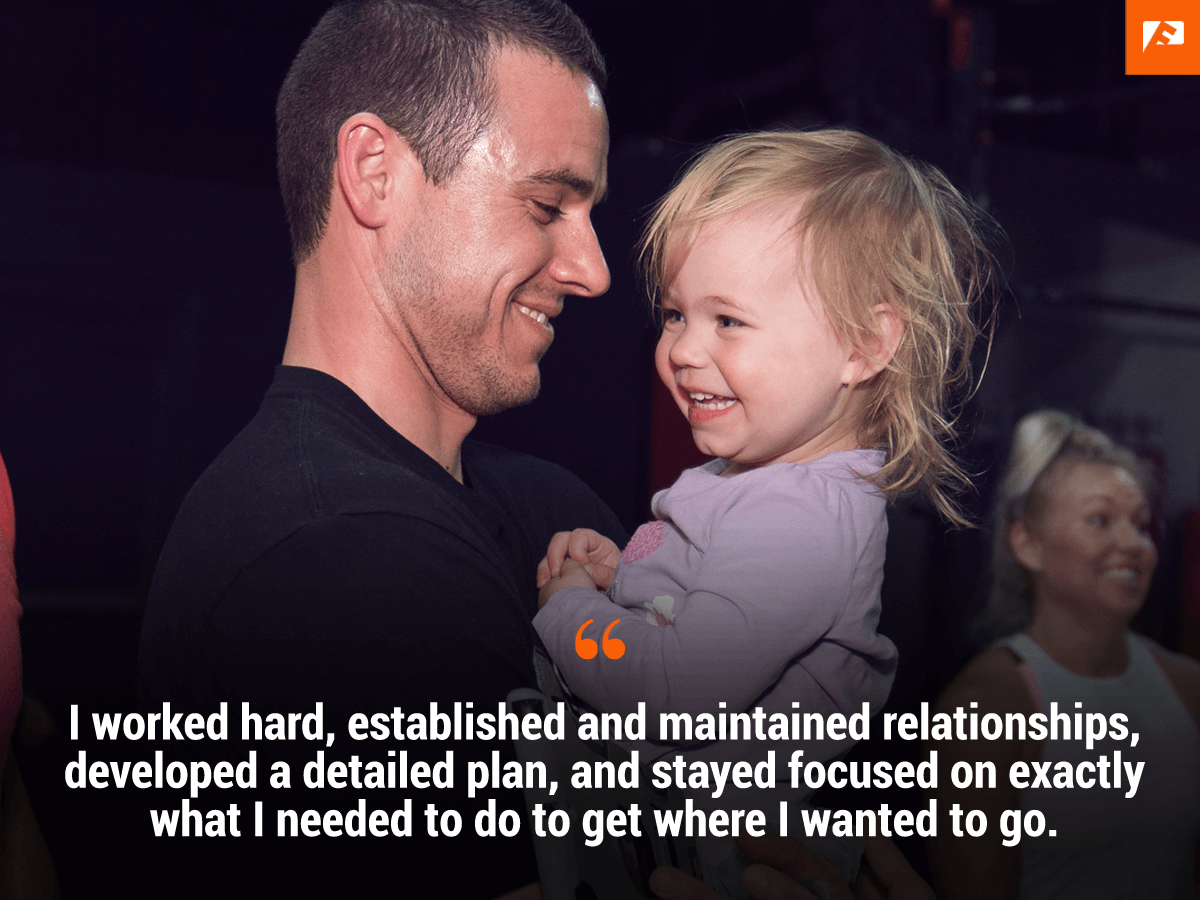 I know what it feels like to live your dream. I am not lucky. I worked hard, established and maintained relationships, developed a detailed plan, and stayed focused on exactly what I needed to do to get where I wanted to go.

My dreams have changed, but I am still living them. I am taking my knowledge, experience, and deep understanding of body mechanics and mental conditioning to help athletes achieve success. I have a framework that allowed me to reach the pinnacle of my sport and this same framework is the key to success in business or anything else you do. My dream is to impart this knowledge to as many people as I can, to help them live their dreams.

One of the best lessons I have learned along the way is that there are no self-made people. The only way to succeed is to surround yourself with a team that will help you get where you want to go. I am dedicated to being a productive resource for athletes. I want to be on their team and help them take their game to a level they never realized was possible.