No kid deserves to die young. I am too well acquainted with this. My uncle Kevin and my cousins Christian and Derrik all passed through freak accidents before they ever hit 21. My friend Bryce, who took his own life the Thursday before our last game this season, gone at 18. I nearly added myself to the list at 20.

My Path To Nebraska Wesleyan

I came to Nebraska Wesleyan for one reason: a girl. I didn’t even really want to be in Nebraska at all. We came together as she was recruited to play tennis at a nearby school. High School sweethearts. My mom hated that I was choosing a school based on a girl. She wanted me to go to my choice of school and do what was right for me. I was able to convince her that it wasn’t because of a girl, it was because of my opportunity to play football as they were also recruiting me heavily at that point.

Football was just a hobby to me for my first year and a half here. My girlfriend was my number one priority. I became dependent on her to be happy and was spending every weekend with her. When I was on campus during the week, I isolated myself. No bonding time with teammates, no other social gatherings. I would just sit in my room, grind on Xbox, and do homework. I was essentially friendless.

My sophomore year after Christmas break, she broke up with me the night before we went back to Nebraska. I was blindsided and lost. Our lives were so intertwined. Her family was my family. She informed me that she was transferring to a Colorado school at the end of the semester. At that point, I hated her. I held a heavy grudge and verbally abused her for leaving me in Nebraska when I only came here for her in the first place.

The nights became endless. Crying myself to sleep at 4:30 in the morning only to wake up at 5:30 to go to weight training for a sport I wasn’t committed to. I lost 23 pounds and drank nothing but pain and tears. At that point, I gave myself two options: kill myself or transfer to Colorado to get her back.

As doubt set in for option 2, option 1 came creeping up on me. I still get chills over that eerie feeling, that blanket of darkness. What was the point of living? I was ashamed what my life had amounted to. The only thing I lived for was her, and she was gone. I went from small town high school quarterback to 3rd string JV wide receiver with 3 career catches. No more purpose. I wanted to add myself to my dead family members, Kevin, Christian, and Derrik. It was destiny to me.

Football And The People In It Saved My Life

My mom convinced me to go to counseling after a long phone call. If it wasn’t for the services provided by Nebraska Wesleyan, I wouldn’t be here today. Those sessions of venting and expression gave me purpose. I needed to find out who James was as a singular person. I began investing myself into football. My transition to where I am now still had a lot of growing pains.

I became a starter in the fall and had a breakout season. The friendships and relationships grew and I started to feel again. Football, and more importantly the people in it, saved my life. But something was still off. That blanket of darkness was still looming, waiting to strike.

My only path to happiness was forgiveness and understanding. I called my ex that summer, our first conversation in a year. I apologized for what I put her through and forgave her for breaking up with me. She made a choice that was best for her. Our exchange was my ultimate growth. The weight of a grudge is too much. Forgiveness and love wins all.

Heading into the fall, my teammates, who I once did not care about, the ones who contributed to saving my life our sophomore year, elected me team captain. I went from JV third string to team captain. I attribute that to the positive experience I received through counseling and the bonds I had formed through coaches and teammates. 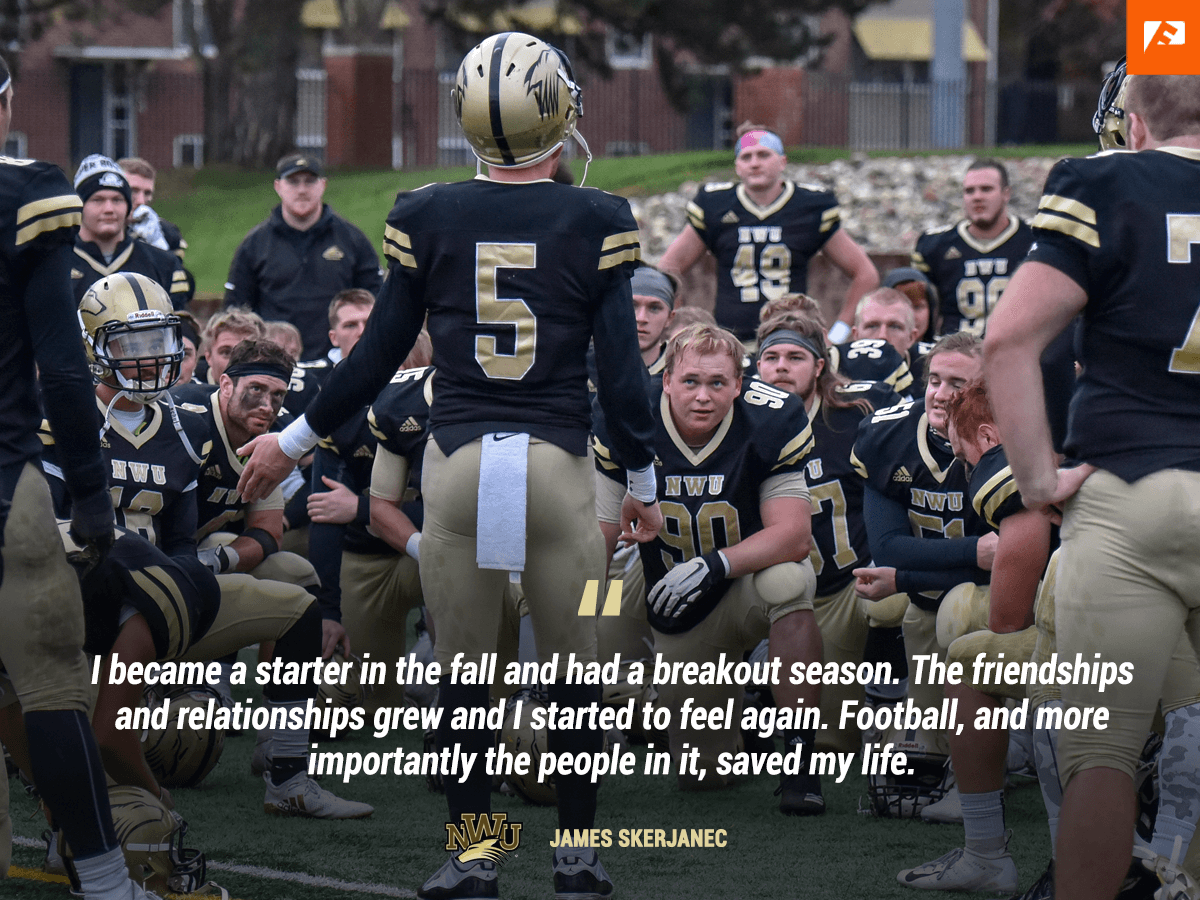 This One’s For You, Bryce

The week heading into our last game, I still didn’t have a touchdown catch on the season. It was frustrating as I lead team in receptions but was allergic to the end zone. The Thursday before the game, my ex called me. She was a sobbing mess. Her cousin, Bryce, took his own life after his girlfriend broke up with him. I considered Bryce my little brother, someone who I had grown close to during our relationship. I had texted him the week before after I saw some disturbing tweets of his, trying to offer some advice as to getting through his situation, so eerily similar to mine. I was shocked.

I played my last game in his honor. In honor of all of the kids who are taken too young. With a minute left in the game, Jon Curti hit me for a game winning touchdown. My first of the season and the last play of my career. The energy I felt was from another dimension. It was the energy of all of the kids who had passed, and on that day, especially Bryce. Just two years before, I was going to join them. At that moment, I lived for them.

My condolences go out to every family that has gone through the loss of the child. Sometimes, events happen that are out of control. But I wrote this piece more importantly for anyone going through depression. It is a battle you have to fight every day. I encourage anyone going through something to seek help for their mental health. The negative stigma of seeking help for mental health needs to be stopped, especially among student athletes. 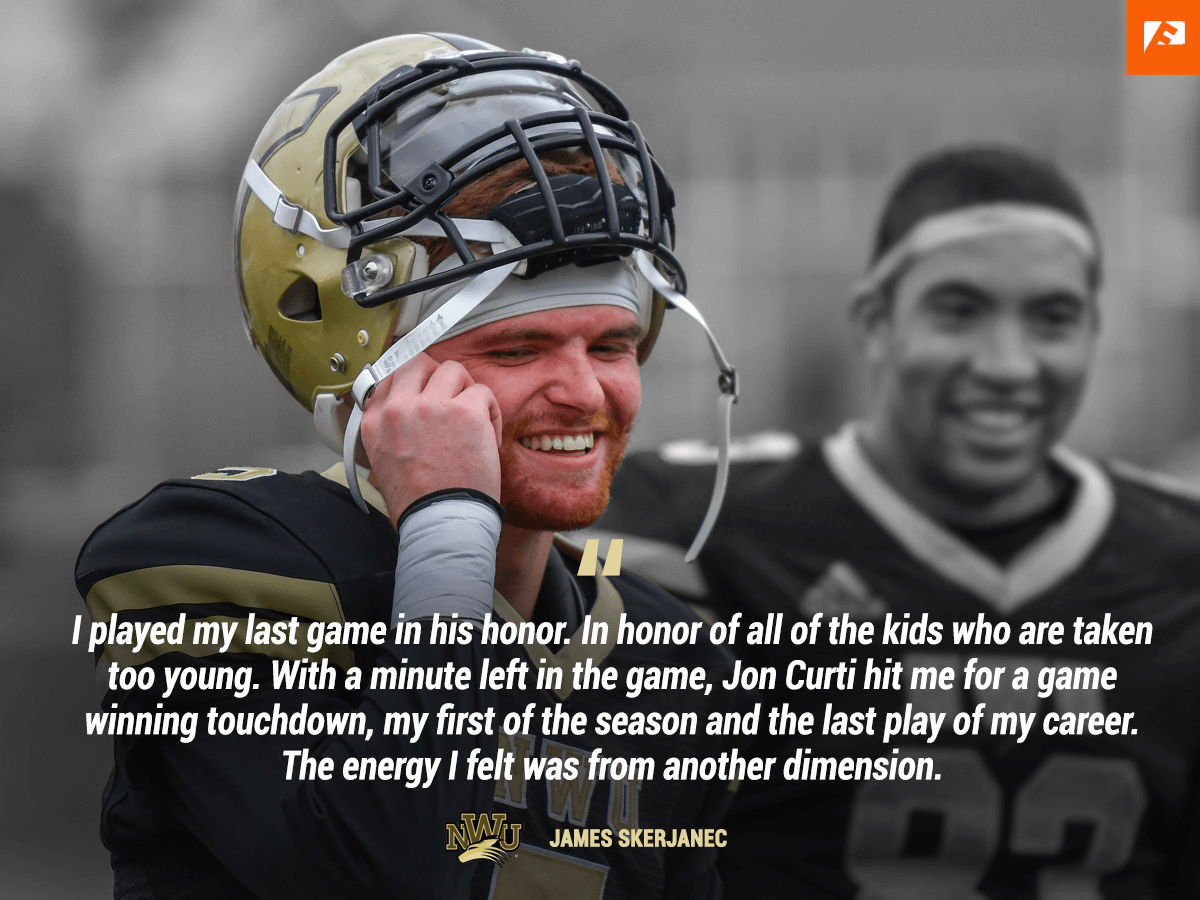 READ MORE: “Your Doubts Are My Fuel” by Shaka Taylor | Nebraska Wesleyan Football

I would also like to thank everyone at Nebraska Wesleyan for helping me through my struggle: my counselor, my teammates, and my coaches. You all helped me realize the importance of understanding, love, and forgiveness when I felt I had nowhere to go. And I became a much better man and leader because of it. Thank you.

Now that my career as a student-athlete has finished, my plans are to stay involved as a coach and teacher. I hope to coach basketball or football and teach biology at the high school level, maybe one day moving to the college level. I would love to be a part of helping kids grow and giving them the outlet of sports when life isn’t going perfectly, the same way it was for me. Because sports can be a beautiful distraction to those who need it.