My Mission As A Trailblazer

I am an openly gay athlete from Blue Springs, Missouri. Throughout the past six months, my life has been very eventful. Going from being a college wrestler to becoming a public person and politician that receives thank you notes from athletes, students, and parents all around the country, has been quite the ride, to say the least. This past June, I made news when I decided to share my story on the national stage of how I came out about my homosexuality to my NCAA college wrestling team. As not everyone may have the same support system and environment that I was blessed to have, I decided to share my story and hopefully give athletes the courage to come out. So, in order to fully grasp my personal experience, let’s start at the beginning.

When I was in high school, I was an openly gay athlete competing in the sports of wrestling, football, and track and field. Despite competing in hyper-masculine sports like and wrestling, I was able to make a name for myself despite my sexuality. And once my high school days were over, I decided to join the wrestling team at Northern State University.

The problem was, however, that I now had to go through the same scary process again. You know, you always have to come out again as you join a new team. And as I went through summer training and preseason with my teammates at Northern State, we grew so closely that it just felt “wrong” to have any secrets in front of them. These were my brothers, my family. And there are no secrets in a family, right?

The Day Had Come

One day, I finally found the courage to tackle this challenge. I remember waking up that day after a rough night the day before as I put a lot of thought into it. All of the different scenarios were playing out in my head. But now, it was time to open up.

First, after going to class, I confided my plans to my parents and asked them for their thoughts. Not only did they meet me with a lot of support, but they also gave me the confidence to take the next step which was to talk to my counselor. As I was aware that one of the counselors was an alumni of the wrestling program, I asked for some of his time and his opinion on me coming out to my team. He asked me one very important question:

What is going to make you happy?

Knowing that my brothers truly see me.

That’s all I needed. I used the positive energy from that meeting to meet up with my head coach next. I walked over to his office and told him that I was gay. He immediately made me feel incredibly comfortable and told me that it doesn’t matter to him at all. Following a very short conversation, he asked if I wanted to tell the team or keep it between the two of us. But sharing it with my teammates was all I wanted. The reason I decided to come out after all. And that’s exactly what I told him. 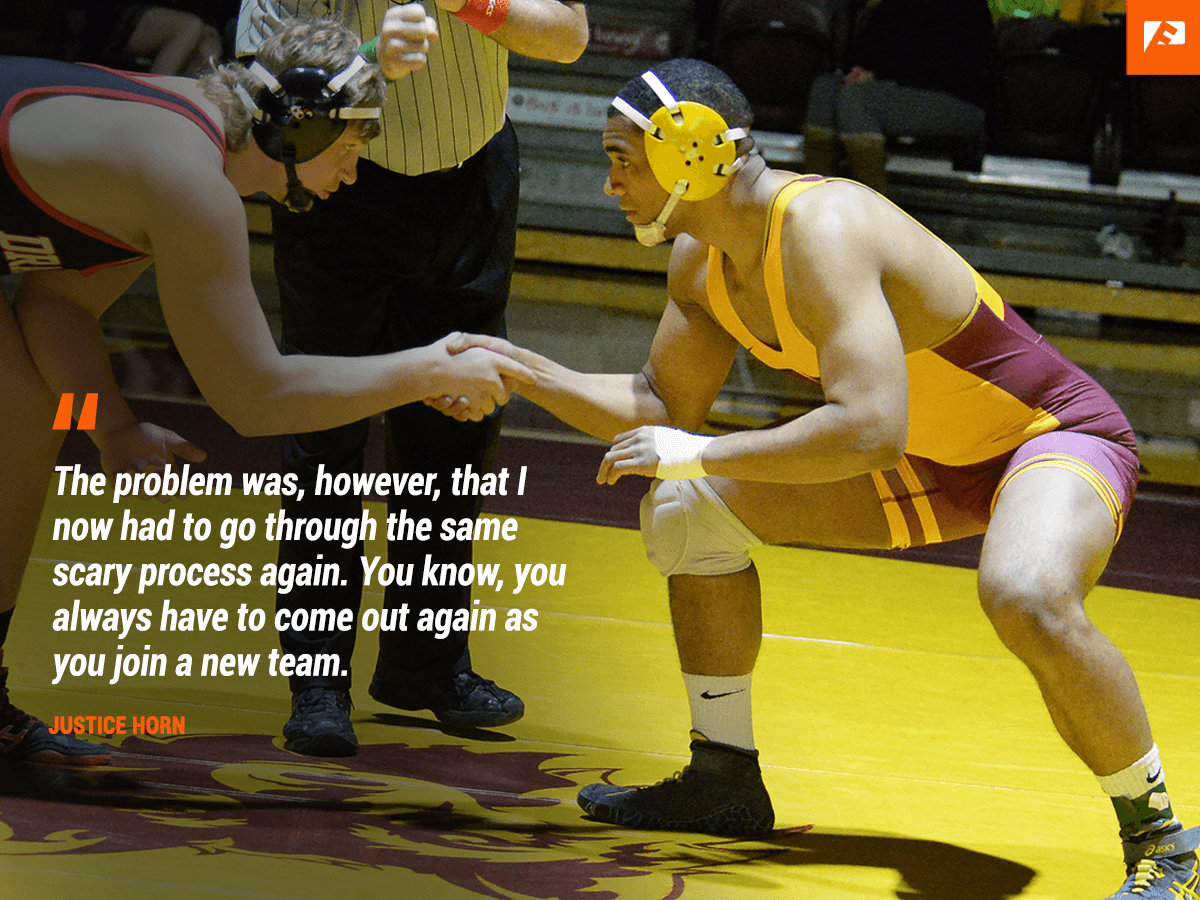 After a 2.5 hour-long practice, our coach brought us in and told everyone that I had an announcement to make. All crazy thoughts were running through my head again. It was nerve-wrecking. I got up and told all my brothers that I’m homosexual and that I didn’t want to have any secrets in front of them as they are family to me. Fortunately, everyone embraced me with acceptance. Their reaction has been incredibly important to me and it felt like a huge weight fell of my shoulders. I couldn’t have been happier in that moment.

After a full year of competing next to my teammates, I was doing an interview that would change my life forever. It was with the Huffington Post. I mean, I was very fortunate to have been on TV interviews, podcasts, skype interviews, etc. to share my story and inspire others, but this, this was a different level. If you want to have a look at the story, here it is.

Now, I have transferred back to compete on the rowing team for UMKC. As I became more of a rising figure politically, this was a strategic move. I truly believe that representation matters and I wanted to follow my calling which was to live my life as a public servant and politician. By now, I received hundreds of letters, emails, and messages from students, athletes, and parents about how my story inspired them. I strongly hope to extend that list and to make the lives of those that come after me easier by continuing to be a trailblazer.