Life Punches You In The Face

In this three-part series, former Iowa State football player and co-founder of Bulu, Paul Jarrett, shares personal and unique experiences from his childhood, youth, and adult years. In this second part, Paul discusses his football career as well as his time as an ultimate fighter.

My Time With The Cyclones

Experiencing Iowa State first-hand came with a big surprise as I learned that for years I had been overworking my body. It wasn’t until I met with Iowa’s trainers & strengths coaches who taught me a simple workout regimen that would maximize my strength gains. Working with them, I just blew up in muscle, weight, and potential.

Playing on a D1 football team obviously can’t last forever. I continued to play throughout the spring season and into the beginning of summer, but I knew I had to have a serious talk with my coach. At that time, I started having issues with my arm and shoulder that slowed down my game. But most of all, I just lost my passion for the game. It’s hard to explain why. To be frank, I’m not even sure I know the answer to that. In the end, I decided to quit the team.

My coach was surprisingly understanding, but of course, with me leaving, there were some unfortunate allegations towards ‘why’. There were rumors that I had been abusing drugs and alcohol, using steroids to enhance my game. I had to deal with all the negative allegations, while also figuring out who I was without football. I feel bad for all the athletes who have their athletic careers cut short because of an injury. It blew my mind how much of myself I lost when I quit football.

My Loss Of Identity

I was in the same situation. Fresh out of college sports for an entire year, I just felt lost. After a while, I devoted all my newly-gained free time to three different jobs. In the mornings, I worked construction, during the evenings, I would serve or bartend, and then at night, I worked security. Just barely leaving myself 2-3 hours in between each job to rest and study for classes. But even working multiple jobs forced me to leave Iowa State as I had lost my scholarship. Deep inside, I always figured I would return to finish my degree.

But over the summer, things got worse. While I was bartending, the regulars would berate me for leaving the Cyclones. The backlash from leaving got so bad that I just couldn’t come back. All the “why’d you quit” and “how dare you” had beaten me down. (even once while bartending, someone gave me a 100 dollars, telling me “here, tryout.”)

I had to get out of there. I decided I would transfer to Nebraska, where I was contacted by their athletic department. But I politely told them “no, thank you, I’m coming to be a regular student”.

I wanted to keep my head down and just get my degree. It’s actually funny because prior to starting at UNL, my parents were joking about my next step being jail. To their credit, their son had given up a full ride to work as a security-construction-bartender. Can’t really blame ‘em, I guess.

Becoming a regular student, the first thing I thought was “shit”, I better get a computer, because that’s what all the smart kids had. So, I got a Mac and started doing some graphic design work and fought like hell to get a position at ‘The Daily Nebraskan’. I worked for them for a while just making designs and selling ad space. And while going to school at Nebraska, I ended up meeting my wife Stephanie. But as it turned out, she hated me in the beginning.

She wanted nothing to do with me for 4-5 years. One thing that didn’t help our “relationship” was the fact that I got into “ultimate fighting”. It all started with my friends and I watching some fights at the Royal Grove. At the end of the night, when all the matches were done, they had free fights. People from the crowd were allowed to come on stage and fight it out.

The first time I got on stage to fight was pretty much by coincidence. I remember we were all crowded around the stage and one of the two fighters who was next backed out. Then, all my friends started egging me on, and I had been drinking, so I stood up with all my friends pointing at me. The ref noticed and called me down to the stage, “You! Come on!” I remember making my way down to the stage and everyone taunting me, I was just: “ooh, you fuckers have no idea.”

The Ref gave me five minutes to get ready. With cargo shorts, no mouthpiece, and a set of thin gloves, I signed their waiver. The bell rings and charging towards me is a 6’8”, 310 lbs. big trucker with a mullet. He lands the first punch directly in the center of my face. It was at that moment where I was like “shit”. I press my gloves to my face and my hands are covered in blood. At that point, I was so enraged that I delivered the biggest haymaker. The punch lands and the guy is just out cold. The crowd goes nuts!

The following week, my friends were all telling me that I had to do it again. I have to admit, after all the sports I’ve played and wins I’ve had; nothing came close to the adrenalin I experienced when knocking out someone cold. I know it sounds awful, but I continued to go the following weeks.

I was 6-0 when I decided to stop. I never took any money, so it was all legal. The only rules were no crotch shots and biting, so you could imagine how bad you got hurt even winning. Eventually, I noticed they were throwing in some ringers. In particular, one huge ex-boxer who was just chiseled. I just said: “there is no way I’m getting in the ring with that”. I didn’t have any formal training and I had watched some of his previous fights. I watched him uppercut some of his opponents completely out of the ring. It wasn’t that I couldn’t deal with professional fighters, but their skill was far above mine and I needed time to learn. 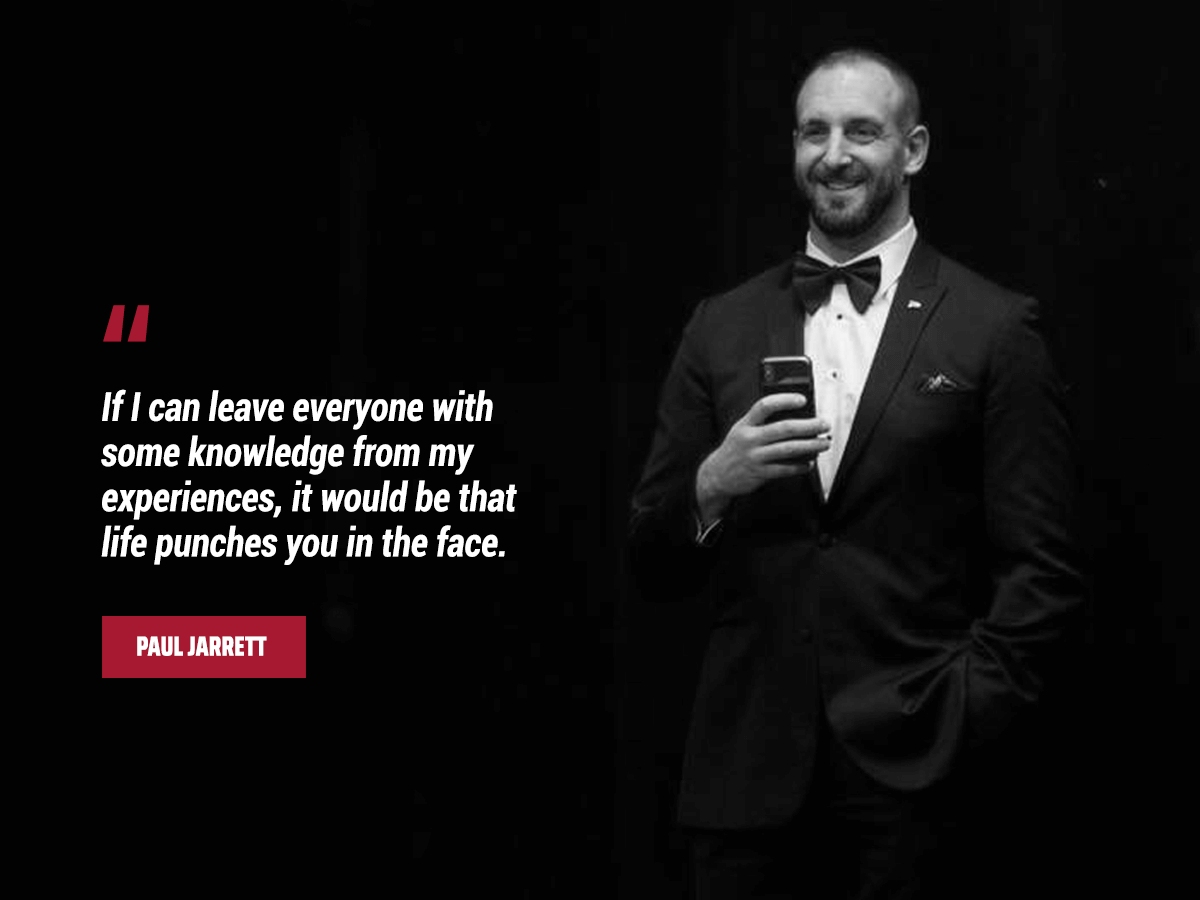 Taking the Punch and Moving Forward

I ended up leaving the fighting world as things were getting complicated. Back then, events were very unregulated and it was altogether just dangerous. Eventually, I thought to myself that I don’t want to live this life anymore as I actually left it behind in the trailer park.

Everyone has a plan until they get Punched in the Face. – Mike Tyson

But it’s never been about the moment of contact, it’s about what you do next. Stepping into the ring with your Goliath and getting wiped, what’s your next move going to be?