Since I was in second grade, I loved playing basketball – I knew this was going to be my life right from the get-go. As I grew older, the heart, love, and passion grew to an even bigger level – so much to where I wanted to be in the gym everyday not only to get better myself but to help others do the same. The gym was and is my happy place. I don’t have to worry about a thing. However, happy place are not free of dangers. In my case, one thing that happened to me in the gym would change my life forever. It was one of the most challenging things that I had to overcome and it felt like an eternity. Facing challenges is difficult. Facing challenges on your own, even more. Hence, I made sure I had the proper people around me.

Nearing the end of my Junior year of High School, I was playing for an AAU team – Hoosier Premier. Hoosier Premier was well-known around the state of Indiana and I absolutely loved playing for them; great players, great coaches, and great atmosphere – not much more you can ask for.

On a Wednesday night, we were practicing for an upcoming tournament down in Indianapolis. It was our first tournament of the season. We started practice and went through our normal routine. After our ten minutes of stretching, we began this drill called 11-man. It is one of the faster-paced drills to get teams moving up and down. At one point, I went up for a rebound, came down and my knee buckled. I instantly fell to the floor holding my knee. It was a really weird feeling, but I knew I could get up and walk it off a bit, so I did. Unfortunately, I wasn’t able to participate in the rest of the practice nor play in our tournament that weekend.

Holding off a week or so, my knee never really swelled up but it also never felt as stable as my other. So, I knew something wasn’t right. My mom scheduled an MRI just to see what was actually going on. When the result came back, they showed that I tore my ACL and in order to repair it, I would need surgery. Hearing that news was one of the most devastating things ever. I have never experienced anything like this before, especially dealing with hospitals. One thing that hit me really hard: there was a good possibility that I would not be back in time for my senior year of high school basketball. That news made me realize how much harder I had to work, because if anyone really knew how I was, they knew for a fact that I wasn’t going to miss a single game.

The timing of this injury was poor, to say the least. This was the most important season for travel basketball. You are getting recruited by college coaches and usually, your Junior year happens to be your last year of travel ball. Well, all my offers were dropped and once that happened, I felt like my entire career was going downhill; although, I knew I couldn’t let that happen.

I ended up having surgery in April on my left knee for an ACL reconstruction. The rehabilitation process was much harder than I ever imagined. Recovering from an ACL injury takes time, it doesn’t just heal right away. Once realizing that, I pushed myself every day to become better, not just physically, but mentally as well. It was important to me to surround myself with the right people.

An injury like this usually takes around eight months to recover but I managed to do so in five. This was just enough time before my Senior season began. No one was expecting me to come back so early, but I promised I would be back – the team was counting on me and I wasn’t going to let them down. Recovering from such a chaotic injury wasn’t just the only struggle, the recruiting process was too.

Putting yourself out there for college coaches is demanding in itself, but having to it all over again was even tougher. Most college coaches had their rosters filled for the 2017 class by the beginning of my Senior year. But, I wasn’t accepting “defeat”.

A few weeks later, I visited Tiffin University. Not sure how else to describe it but once I stepped foot on campus, I instantly fell in love. It wasn’t just the campus. There was something about the atmosphere and type of people that captured my attention. It felt perfect from the start. One week later, I committed. And this commitment was life-changing. Everything, all the pressure, fell off my shoulders knowing that I had a great part of my near future figured out.

It was now time to begin my first year of college at Tiffin University and I was so excited. I was anxious to meet many new people and what the college life was like. I always wondered if college would be as difficult as my high school teachers talked it up to be so as a first-year student, it was time to experience that.

Once classes began, I was beyond eager to get on the court with my teammates. It is a totally different world when it comes to college basketball – it is a lot more work than what most people likely assume. Prior to the beginning of school, I had the opportunity to play a few open games with my team and simply knowing that we all shared the same passion was the best feeling ever.

Coming in as a freshman, you really don’t know what to expect other than that it will probably be far more intense. And I loved that. I am the type of person that absolutely adores to be pushed outside of my comfort zone. It may be uncomfortable at the time, but the results will become evident soon after. These results widen your horizon really give you a sense of being able to accomplish anything.

With my preseason coming to an end, I knew we were that much closer to GAME DAY! Finally! The last day of preseason, our team decided to have an open gym, just to get up and down a little. Well, unfortunately, it was a bit more than getting “up and down a little” for me. I never thought I would have to experience this again but… I came down with another ACL injury on my right knee.

This time, it was the opposite leg. Hearing the news was devastating. I knew I didn’t have a choice but to get surgery. So, here we go again. Another long recovery. People always say that everything happens for a reason but honestly, sometimes it is very hard to see it that way.

Another Change Is Happening!

It ended up being a very long freshman year for me. I was expecting to play my very first collegiate game but that never happened; therefore, I had to work on preparing for next season and that is just what I did. Our season didn’t go how we were expecting. We didn’t have a great record and five players were out with torn ACLs. But, I wasn’t going to let that affect me from moving forward. My rehab process went well which is what I desperately needed to hear. 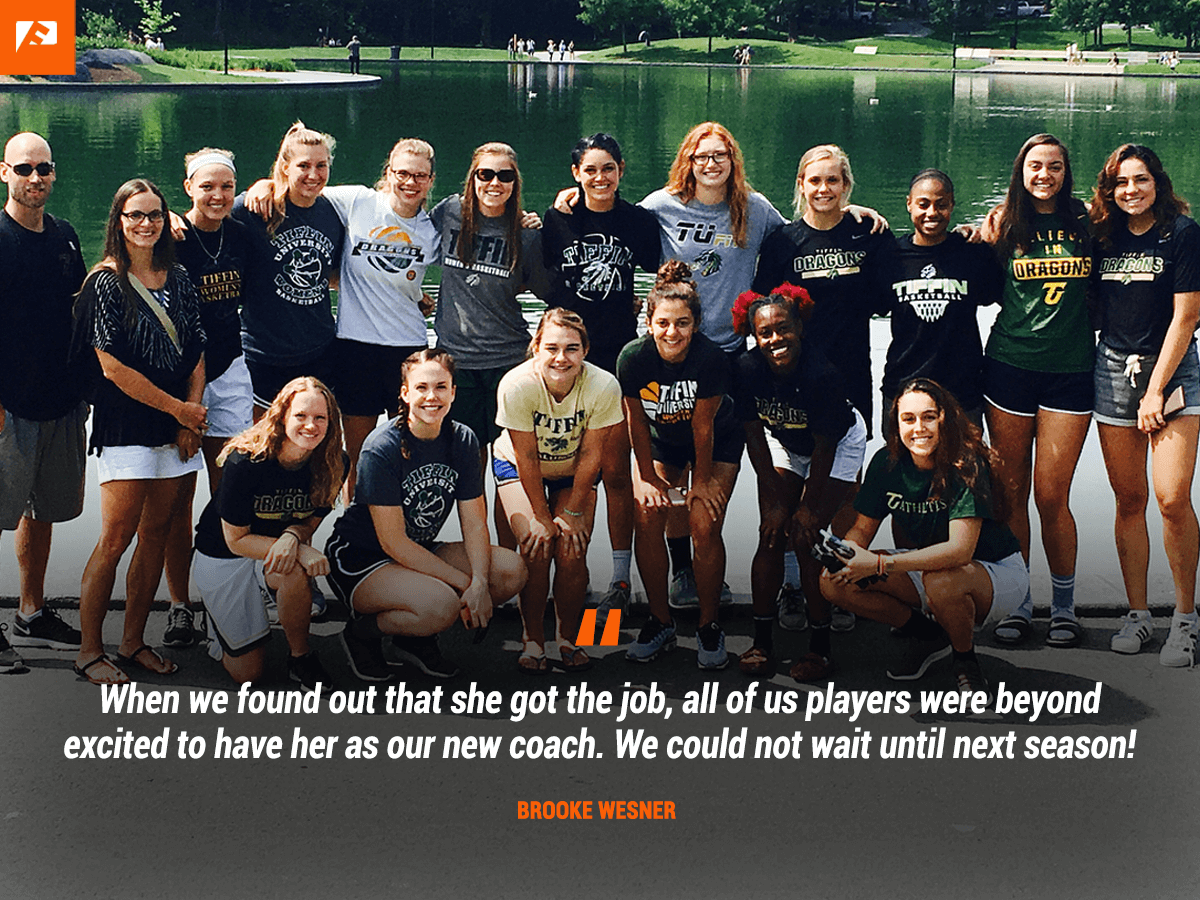 Our team also went through the hiring process of a new coach during that time and one week prior to school coming to an end, Tiffin had a new coach, Jessie Ivey.Fortunately, some of us players were able to play a part in the recruiting process as we met each coaching candidate and were allowed to state our thoughts and opinions. Once we spoke with Coach Ivey, we knew immediately that she would be the perfect fit. When we found out that she got the job, all of us players were beyond excited to have her as our new coach. We could not wait until next season!

It was a long summer for myself trying to get back to full-go before my second preseason began with our new coach. I knew she was expecting big things from us coming in. It was the toughest preseason that I ever gone through but let me tell you: it paid off!

Coach Ivey has this acronym HABITS that her, her staff, and us players live by: Heartwork, Attack, Believe, Integrity, Toughness, Sacrifice. This acronym is our culture, and this has changed everything.

Attack: our everyday mentality, always with 100% effort and energy.

Integrity: be YOU, wherever you are.

Toughness: both physically and mentally.

Sacrifice: the ME for the WE.

Realizing how well this affects us players on and off the court was life-changing. It is unbelievable how this has changed our program and us players as to how we look at things.

With it only being my second year here at Tiffin as a student-athlete, I would say that I am beyond blessed to have Coach Ivey and her staff around me as they continue to make me a better player on the court and even a better person off the court. I can’t wait to continue my basketball career here and to see what the future has in store.

They say everything happens for a reason – I think this is the reason!