Road to US Open Winner

My name is Liz Kuhlkin. I bowled for the University of Nebraska from the fall of 2011 to the spring of 2015. I immensely enjoyed my time as a Cornhusker, winning two NCAA titles in 2013 and 2015, the one in 2015 being a fairytale ending to my career which ended as a two time NCAA title winner, three time NTCA 1st Team All-American, NCAA Div. I Player of the Year (2015) and Nebraska Female Athlete of the Year (2015).

Being at Nebraska meant so much more than just playing a sport. Attending Nebraska also meant the universal feeling of being a Husker; a sacred name that is kept long after one’s time at Nebraska. There is an environment at Nebraska that centers around family, integrity and growth. I grew so much as not only a player but as a person there, and I learned life lessons there that I would put forth in my professional career. I am grateful for the time I had with world class coaches, professors, players, trainers and counselors at Nebraska. Even though I am graduated now, I always perform with the scarlet N on my sleeve. 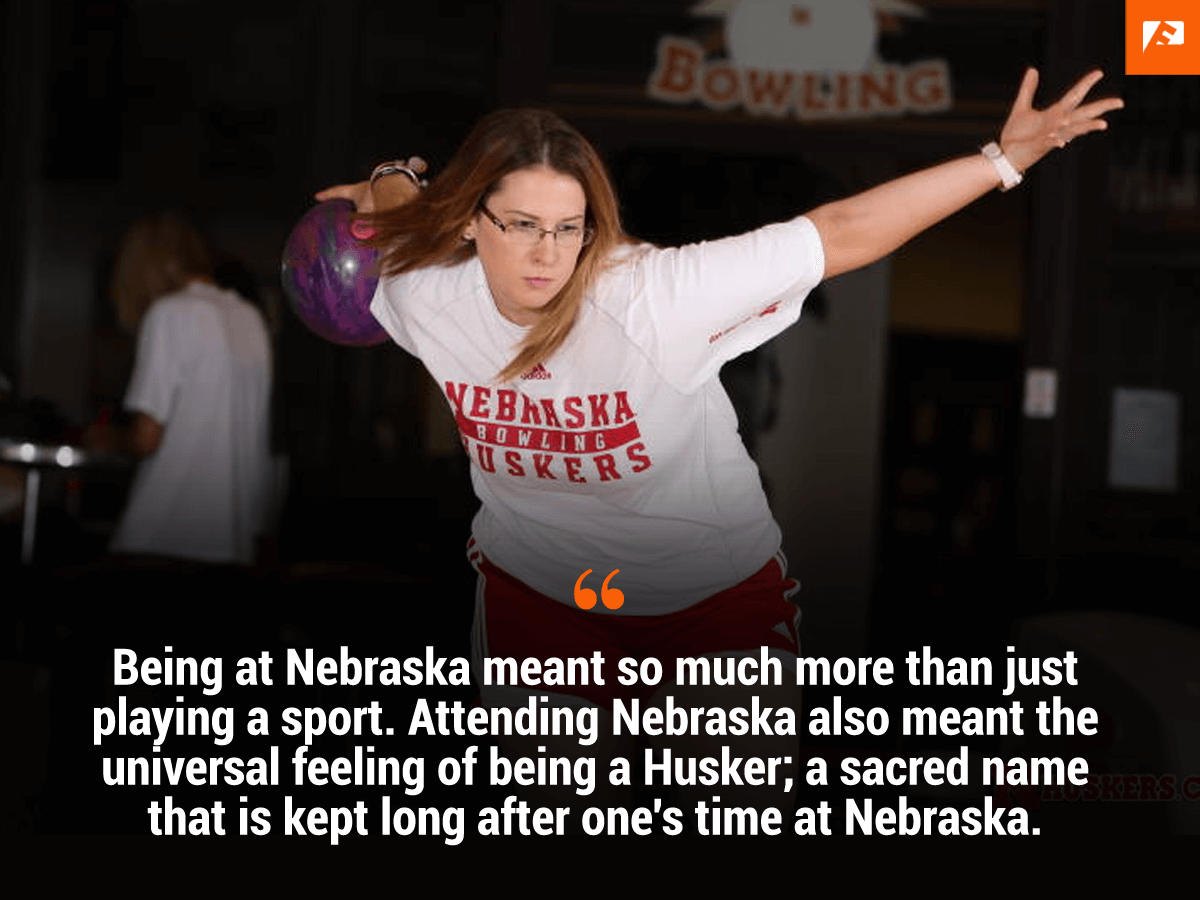 In 2015, immediately after receiving my Bachelors degree in Criminology, I hopped in a car and drove to Green Bay, WI to bowl the USBC Queens, the first PWBA (Professional Women’s Bowling Association) stop since its hiatus in 2004. While I was anxious and nervous to begin my first professional event, I was also so excited to put forth the skills I had learned at Nebraska for the past 4 years! I was able to make the telecast at my first event, and I ended up tying on television and eventually losing in a roll-off for a fifth-place finish. I was elated at this result, and it motivated me to work harder so I could rise to the top. That year, I was able to reach the pinnacle of our sport, and walk away with my first professional title in August of 2015, where I won in Topeka, KS in the PWBA Topeka Open. This was an incredible feeling and I’m sure any athlete can attest to the feeling of having all the long hours of training pay off.

I had a very successful rookie year. However, with every amount of success, there are some setbacks as well. I found that I started to take my talent and ability for granted a bit. Since I had success so early on in my career, I started to believe that it was going to be easy fitting in on tour. I was very wrong. The next few years on tour, I struggled from stop to stop, having bursts of success, however, most of my second and third season on the tour were mediocre and I had a lot of thinking to do if I truly wanted bowling to be my lifelong profession and career.

In January of 2018, I made a decision to switch ball sponsors to Brunswick, a decision that brought new equipment into my career. This was the best decision I made in my career to date, as it gave me more motivation to improve not only for myself but for my new ball company. I made Team USA later that month at the trials and was back on track to being the bowler I knew deep down I was. Entering my fourth year on tour I knew I was ready to getting back on track to being competitive week to week. I have been doing great to this point on tour, I am now sixth in player points and third in earnings.

My biggest accomplishment this year was recently winning the 2018 US Women’s Open in late June. I climbed the ladder to come out on top of my first “major”. Just like in golf and tennis, there is a US Open which is the pinnacle of the sport. I feel incredibly honored to be included in this class of prestigious player of US Open champions. It made me realize that because I was going back to disciplined practices and workouts, I saw myself back on top. Now, I am never going to take my ability for granted again.

I want to encourage all athletes reading my story to know the importance of always working hard no matter how much success one may have at one point in time. When you are not working hard, someone else is and they are going to beat you down the line. Stay strong and always follow your heart and dreams!

Thank you for listening to my story!