Back in the day, soccer was my life and everything revolved around it. Today, soccer is a big passion of mine but it is not the only thing that defines me.

Between these two different outlooks on life and the sport of soccer, a lot has happened. To give this all a bit more context, let me start of by talking about my early soccer days.

How Soccer Became A Part Of My Life

I grew up with two older brothers that I always looked up to more than anyone else in my life. Especially when it came to sports. Both of my brothers were great competitors, gifted athletes, and went on to fulfill their Division I dreams. As a little girl, all I ever wanted was to be like my brothers.

We connected and bonded through sports. I was craving for their acceptance and respect. Every day, we would be in the backyard playing with some kind of ball. It usually ended with one of us running inside crying because we were either too competitive or someone got hurt. Growing up with bigger brothers is definitely a fundamental reason as to why I am where I am today and how I fell in love with soccer. Many people would describe my playing style as “physically tough” and I can definitely thank my brothers for that.

Until I was 13 years old, my soccer career went fairly straightforward. Then, however, things would be drastically different and nothing would ever be the same.

I was a freshman in high school. Gameday! I took a long drive down the middle of the field and took a shot with my left foot. The next thing I knew, I was on the ground screaming in pain. I had torn my ACL and meniscus, and I would have surgery a couple days into summer. They used a part of my hamstring to put in as a new ligament. For an incredibly competitive 13-year-old girl, it was some hard news to take in.

The problem was that I didn’t know a life where I wasn’t practicing regularly or traveling to soccer tournaments every weekend. In that moment, a six-month recovery seemed like a lifetime. Yet, I had no idea that the journey ahead of me would be much, much longer.

Nothing about my first recovery went well. I ended up having to get a second surgery as I was severely struggling with my range of motion. My incision got infected and was twice the size that it should have been. Going to doctor’s appointments usually concluded with tears rolling down my face. It was devastating.

After I was finally cleared to play again, I was three games into the season when I felt my knee shift again. But something was different this time. As a result, we went to a new doctor who essentially told me that my bones, where they had drilled the holes to insert a new ACL, got far too wide which made it impossible to put in a new ACL. So, surgery #3 was a bone graft.

This time, they filled the holes with cadaver bone and all I could really do was wait. Four months for that to just heal. Following that, surgery #4 was my new ACL. This go-round would make it a 10-12 month recovery phase. The surgery would force me to sit out of my sophomore season of high school and club season. But honestly, at this point, it was just what it was to me. I knew what needed to be done and I was simply going to do it. So many people told me to just hang it up and save my body & mind from the stress. But they clearly knew nothing about me. Their statements only made me want to come back even more. 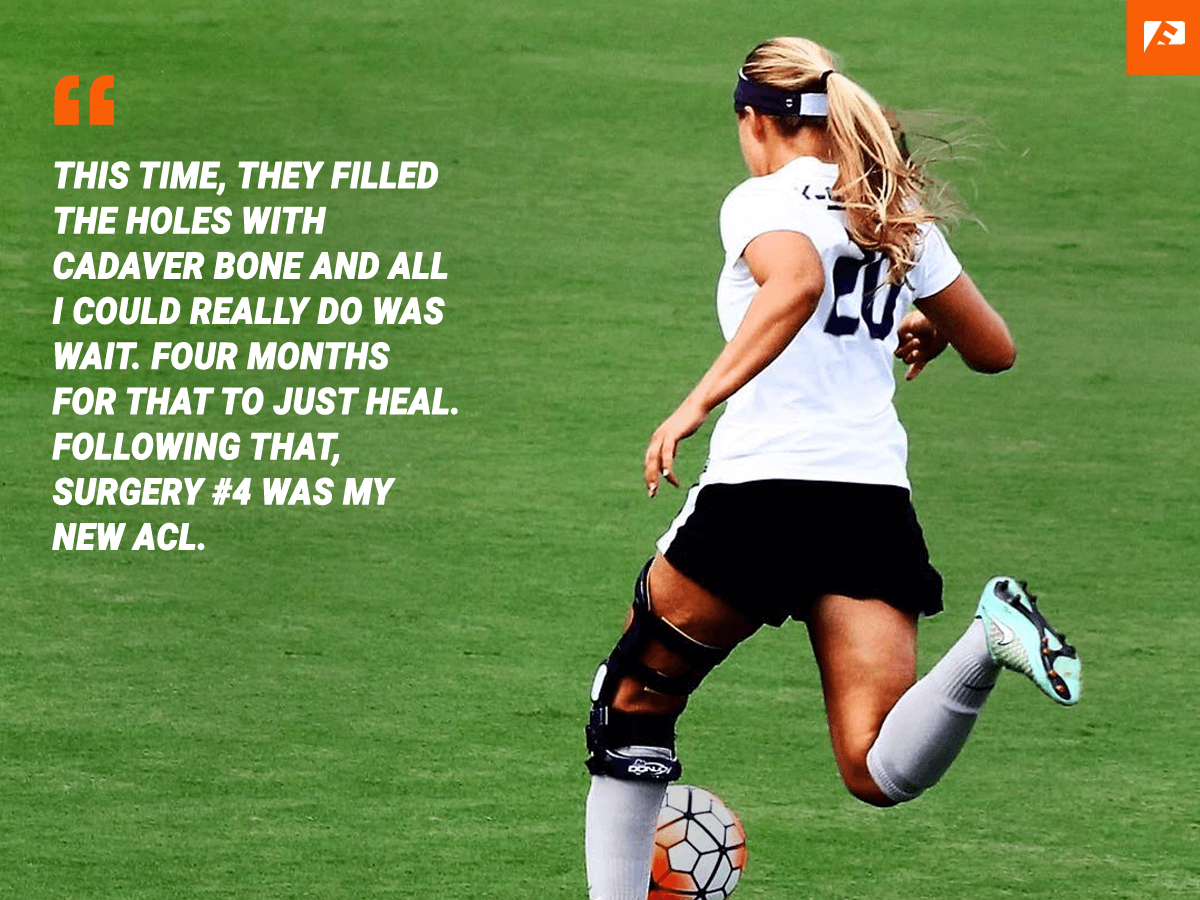 The Road To Recovery

For my rehab process, I would go to my local YMCA at 4:30 in the morning Monday through Friday. And after school, I would go back to do even more rehab. My mind was determined to not give up. In fact, quitting had never even crossed my mind.

I came back for my junior season of high school where I had an incredible year with my team. I scored 44 goals that season and genuinely loved playing soccer more than I ever have. All that I had been through now felt well worth it. But unfortunately, this would not be the fairytale ending to my knee issues. My knee was shifting again. By this time, however, I knew exactly what it was. Plain and simple –  my ACL was not there. My knee shifted three or four times while playing before I decided to say something about it. I would just power through the pain and eventually, it would start to feel better. But as it kept happening, I knew I couldn’t ignore it anymore.

When I first met with the doctors, their initial pre-examinations found it hard to believe that there was no ACL. Via a “just-in-case” MRI, it was confirmed that there was absolutely nothing in there. That shocking MRI confirmed that I had played eight months without an ACL. My body had rejected the cadaver and it disintegrated in my body. I had rehabbed that excessively that the muscles around my knee were so strong that it took me eight months to figure out that something was not right. Coming off of a successful high school season and being in the middle of my competitive club season, this was another devastating setback. I didn’t waste much time moping about it for long, though. I got my fifth surgery a week later. This time, they took out a part of my quad for my new ligament and I started the process all over again. It was another year before I got cleared to play, forcing me to sit out of my senior soccer season.

The Joy Of Being A Wildcat

During the important years of recruiting, I watched all of my soccer friends commit and find their place in the collegiate world of soccer. That was hard because I couldn’t do anything about it sitting on the sidelines. Deciding to continue to trust the process, I found myself visiting Kansas State University and got the opportunity to start a team from scratch in a power five conference. I had a couple other offers as well but I just had this gut feeling that drew me to K-State. It felt like home from the second I stepped onto campus and I knew that this was where I needed to be. Turns out that my gut feeling was right as I have met some of the most incredible people here, including my fiance that plays on the K-State football team. 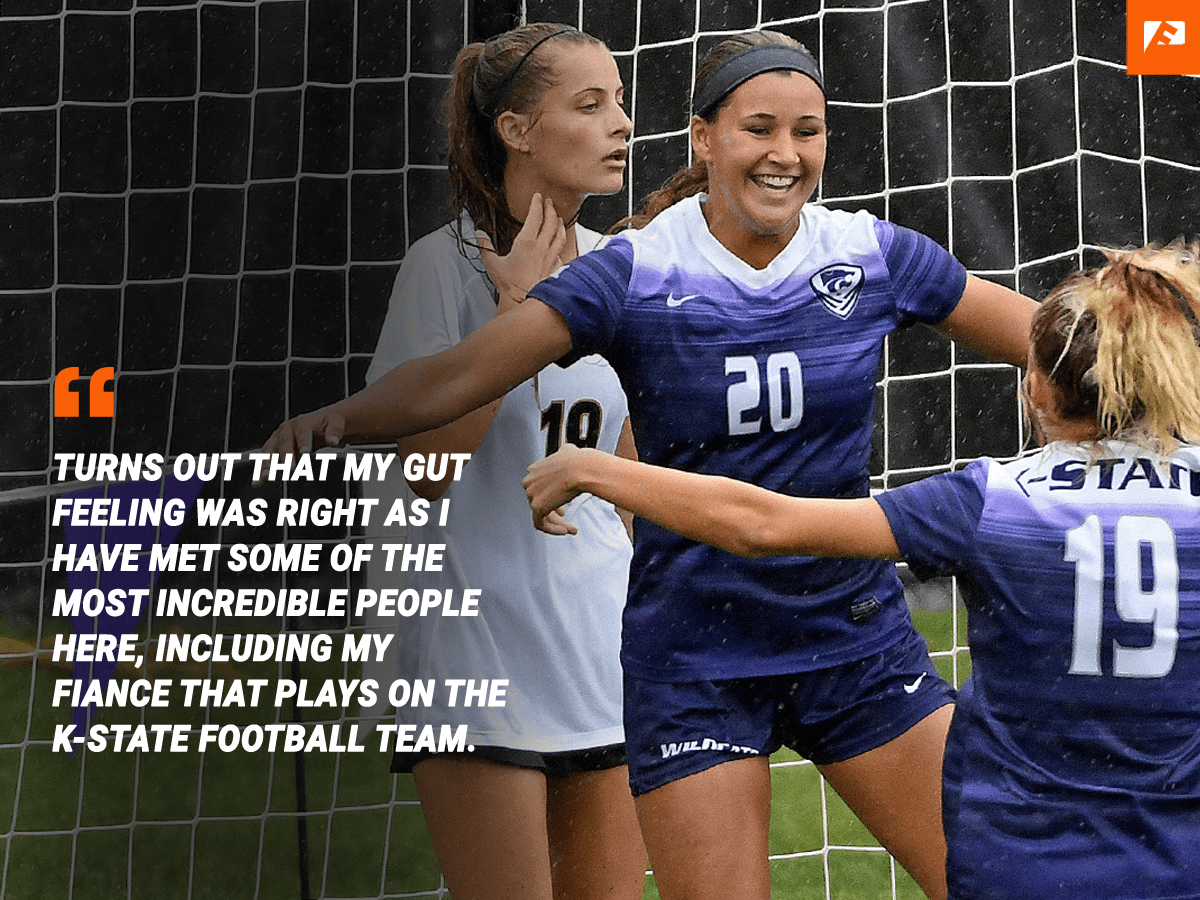 For a girl that thought that her soccer career could possibly be over, representing the Wildcats means more than words could ever explain. Every time I put on that jersey, I remind myself of what I’ve been through to get here. And I take a lot of pride in that. I have a deep sense of gratitude. Gratitude towards my coaches for giving me this chance, gratitude towards myself for never giving up, and gratitude towards the journey. I will never be as good of a soccer player as I once was or could have been, but my character has grown in ways it never could have without everything that has happened. Finding the beauty in the journey has never been hard.

Grateful For The Experiences

Looking back now, I would never trade my story for anything. I learned a lot about myself during this adventure of adversity and am very thankful for what I have been through. It has played an important role for the person that I am today.

At first, I have to admit, I felt betrayed. By the game, by the medical world, by everything. I had always been one of the hardest workers in everything I did. Why did I deserve this? But that mindset didn’t last long. There was a greater purpose and meaning for everything. I always just put my head down and got back to work.

I remember walking in on a conversation my parents were having following the time I was told I needed ACL #2. By just looking at their faces, I could tell how much it hurt them. But God had instilled a sense of peace inside of me and I confidently told them: “it is going to be okay. I know what I need to do and I got this.” What kept me going was my own determination. Or stubbornness, who knows. I wasn’t going to quit and all of the people who counted me out is what kept me driven to prove them wrong.

What I Learned From It

Sometimes, we place so much importance on the stats and the sport that we lose ourselves and the things we believe in. Don’t forget to stop sometimes and remind yourself of all that you have been through to get where you are. Don’t measure your success on the minutes or the goals, be proud of what you have done, and have the drive to go further. Give your sport everything you have but don’t forget to be the person you are when you are not wearing the jersey. Because at the end of the day, it won’t last forever… but your character will.