Everything Happens For A Reason

My name is Alice Wright and I’m a professional runner. If there is one thing I want you to take away from my story, it’s what not to do when you are injured.

The Early Days Of My Career

Throughout the first dozen years of my life, I spent a lot of time cross-training. Quite frankly, I would argue that I have likely cross-trained more than I ran. But once I started to take running more seriously, around the age of 13, I had my first experience with an injury. At that point, I had no clue what was to come with regards to injuries in my life.

I ran blissfully unaware on low mileage for about three years. Then, all of a sudden, I felt a sharp pain. Knowing little about injuries and not coming from a family of runners, I assumed it would be gone with a little ice and a support sleeve; like any other trauma injury I’d received from playing field hockey in my earlier years.

However, this was not the case. My lack of knowledge mixed with my purely impatient nature led this simple tendon issue to last for almost three years. I would desperately try and massage out the pain and as soon as I felt any sort of relief, I’d try running again. Only to put myself right back to square one. I even tried modifying my running form but that, of course, only caused pain elsewhere. My sheer reluctance to let this injury heal for any longer than a couple of days meant for this vicious cycle to dictate my running and racing life. I spent many late nights reading up on the anatomy of the calf and stumbled across a common running injury – stress fractures.

That must be it.

I read that an MRI was the only true predictor of this type of injury; a scan that must be prescribed by a doctor. Having already seen my local doctor and being told to take six weeks off (that was way out of the question in my mind) and given a course of ibuprofen, I lacked faith he would prescribe me for an MRI. Nonetheless, I asked, and to my horror, I was told the wait might be as long as three months since it wasn’t considered an ‘urgency’. Although it could not have been any more urgent in my mind. It was this bit of news that led me to think more seriously about moving to the states for college.

After speaking with Joe Franklin, the head coach at New Mexico, and being told that I could get an MRI sorted here within days, my mind was pretty much made up. I felt extremely lucky in the first place to even be approached from any US university as I had been sidelined from racing for almost three years.

About a month later, I was saying farewell to my family in the small country village of Abberley; completely unaware of where I was about to land and the next five years ahead. I certainly wonder sometimes whether I would have chosen to attend university in the states if it hadn’t been for my complete injury despair. The saying “everything happens for a reason” springs to mind. Little did I know that choosing UNM would be the best decision I would ever make. 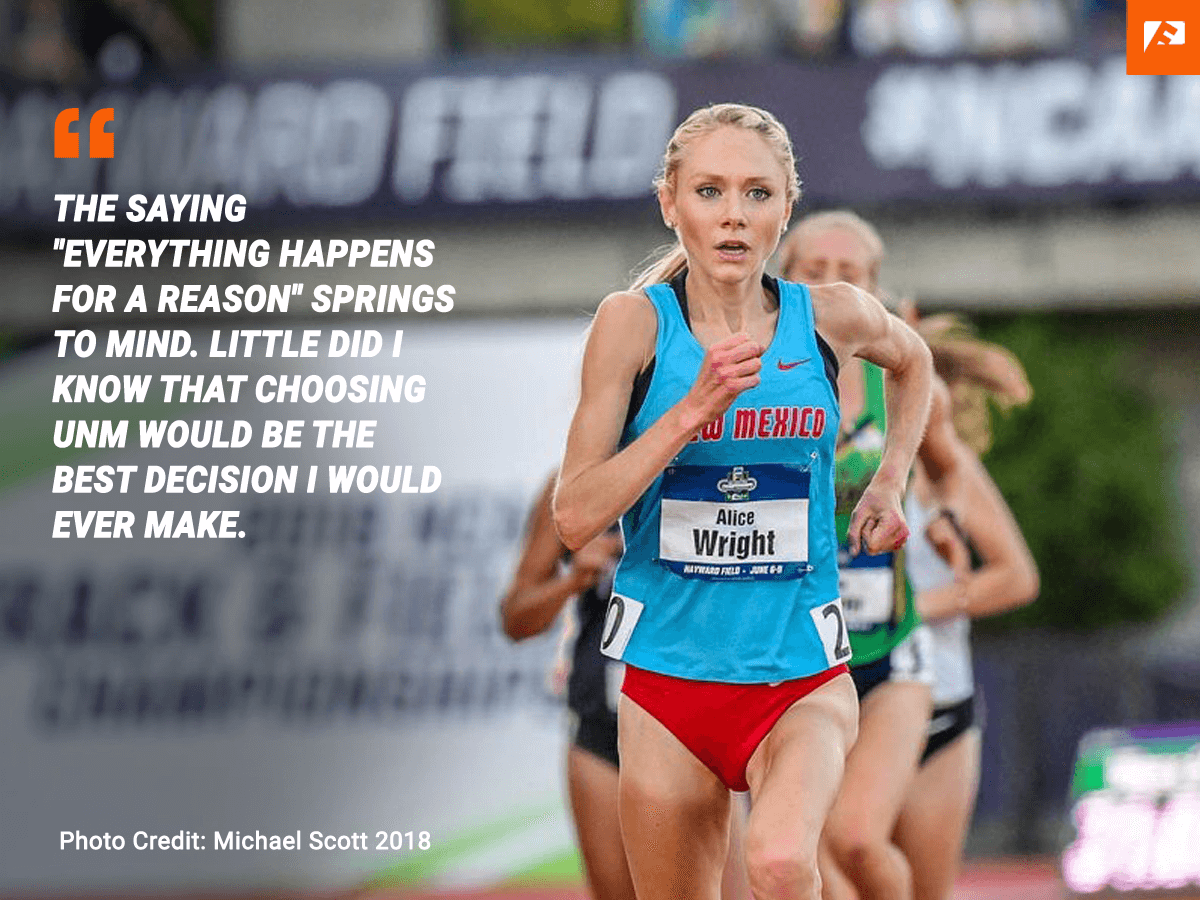 Early Days With The Lobos

Few know that my first year at UNM was a complete flop. Despite my calf issues resolving within a few weeks of training room treatment, my urge to get fit as quickly as possible resulted in a femoral stress fracture. Another 12 weeks sidelined. I’d become well accustomed to cross training by then and the art of aqua jogging and biking. This injury, however, was different though.

Before my calf issues back in 2011, I was considered a ‘good runner’ with bright hopes for the future. But this femoral stress fracture came after a disastrous first couple of months of training. I was clinging on for dear life during tempos at 6.45/mile pace and could hardly break 85 seconds for 400m reps of the track. I started to wonder: what was the point anymore; had I completely lost any running talent I may have had before?

Time For a Change

It was the summer of 2014 that I decided enough was enough. I needed to get back to the runner I knew I once was, otherwise, I would be in danger of losing my scholarship to a university I loved so dearly. That summer, I worked hard to discipline myself back into a regular running routine, paired with cross training. I was determined to come back in August as a different athlete and shock everyone.

The fall of 2014 was a good season for me. I managed to come away with an All-American place at the NCAA’s and was able to help my team to a third-place finish. That set the tone for the rest of my collegiate career and I was resolute to get All-American honors at every remaining NCAA meet. Of course, it wasn’t all plain-sailing, but with the tremendous support from Joe Franklin and the rest of the coaching and medical team at New Mexico, I managed to put together four years of almost injury-free running (aside from the odd tendon flare up every now and then) and ended up becoming the only female that earned All-American honors in the 10k four years in a row.

Now, I felt that I’ve had more running consistency than ever before. But more importantly, the lessons I learned during my long periods of time away from racing are what I mentally value most. 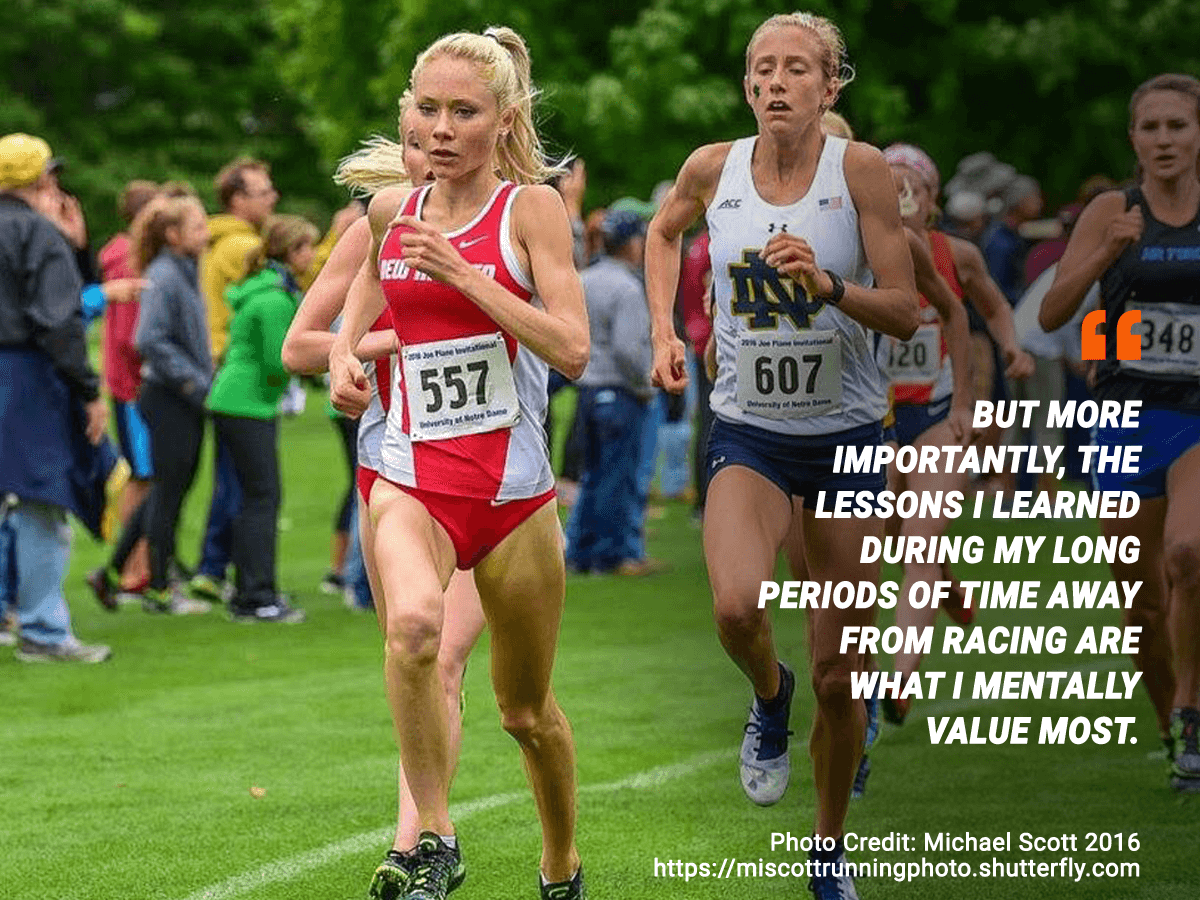 Currently, I am dealing with some tendon issues in my calf and despite being hugely frustrated for the last couple of weeks, I realize that in the grand scheme of things, three or even four weeks off are nothing compared to the three years I had to endure in my teenage years. My mentality towards injuries has also changed. I understand that injuries are a warning sign to my body. It’s my body’s way of telling me to back off a little.

Therefore, overdoing it with cross training or constantly ‘testing out’ the injury is only going to set me back further. And if nothing else, I feel I could confidently recite all the small muscles of the lower leg and ankle!

A Pieces of Advice

But seriously, to any young athlete that’s struggling with injury and has managed to get this far in this injury spiel. My best advice would be to firstly accept you have an injury (denying will simply set you back further) and realize that taking four days off now could save you from taking months off down the line. Secondly, have confidence that you are a talented runner and once you get over that initial ‘bambi on ice’ phase that you might feel on your first couple of runs back from time off, your running fitness will return more quickly than you think. Finally, always ensure you have more hobbies than just running (even when running is going great) as this will help you hugely during any forced time off from the sport. It will help you avoid the injury depression and give you something else to channel your energy towards rather than just stressing about your injury and not running.

I hope my story helps anyone who is struggling with injury – I always like to think everything happens for a reason; my best seasons have come after injury and I don’t think this is just a coincidence!