As a collegiate athlete, you’ll go through a lot of various stages and events. Most student-athletes receive some sort of a scholarship, work with tutors, get free gear, travel to cool places, and eventually earn a degree.

But what no one tells you is what life is like afterwards. No one tells you how to prepare for limbo, that period of time when you don’t know what do to between being done with your sport and finding your first job. Yes, people tell you “it’s so sad”, “it’s bittersweet”, “so much free time”, but there’s absolutely no way to prepare for it. For that initial feeling you get when you shake hands for the last match as a collegiate tennis player.

For me, that moment came when I got absolutely crushed in the Pac-12 tournament against UCLA. When we met to shake hands after the final match, I forced myself to hold back tears. Because my team was still playing, I held on to a brave face, focusing only on the game and supporting my teammates.

It wasn’t until we officially got beaten that I paced off the court towards my fellow senior teammate Sophia Thomas, her arms wrapped around me and we broke into tears. She said, “this is it, it’s over, we’re done.” In that moment, it was all over. My heart hurt physically and emotionally.

But that moment with her was so important to me because I knew I wasn’t alone, and that’s what every student-athlete needs to know… you are not alone.

Hundreds of other athletes are going through the same thing you are and feeling the same emotions. I’ve learned that it takes time to move on and that’s ok. First comes acceptance within yourself, you need to be ok with it being over. Be excited for what’s ahead, even if you’re not sure what that might be yet. 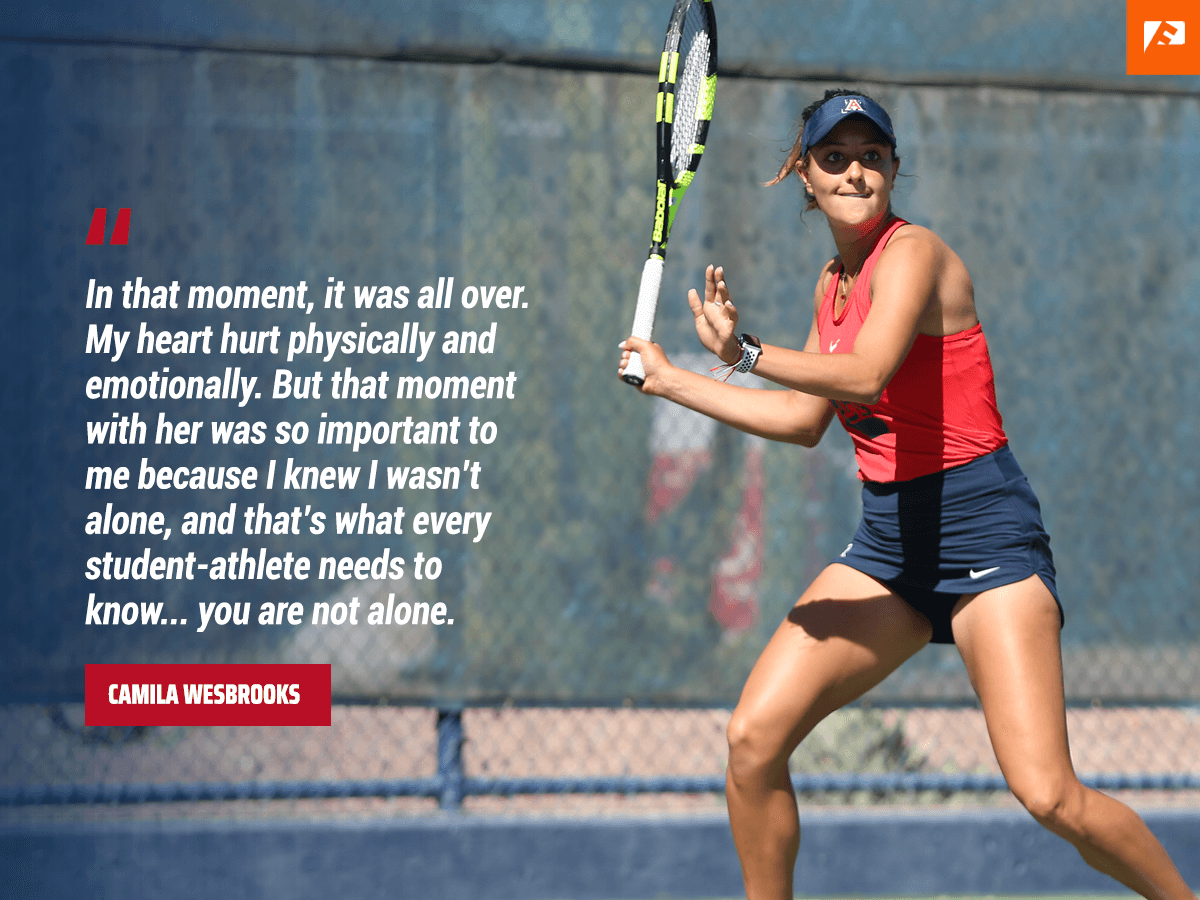 READ MORE: “The Magic of Being a Student-Athlete” by Christopher Patzanovsky | Memphis Tigers – Men’s Tennis

I haven’t quite found what it is I want to do for my first job, so I decided to give myself another year to figure it out while I finish my undergrad. I will be taking classes to finish my journalism degree, while working as the Sports Interim Director for the women’s tennis team at Arizona.

My coach, Ryan Stotland, gave me the position and I’m so thankful for this opportunity. I figure the position would give me experience in public relations and journalism, two disciplines I’m very interested in.

For my life after sports I initially planned on working a full-time job for my fifth year in school. However, it has been hard for me to plan ahead, because I am finally getting the knee surgery I’ve needed. For a preexisting injury that I’ve played with for the last four years, just another obstacle I’ve had to overcome.

Playing with an injury was not always fun, but my experience at Arizona was irreplaceable. My injury is due to a defect which causes missing cartilage in my left knee. Essentially, it’s bone on bone, so at the end of this month I will undergo my first surgery of two. The second one being scheduled for when I return for my final semester in August. 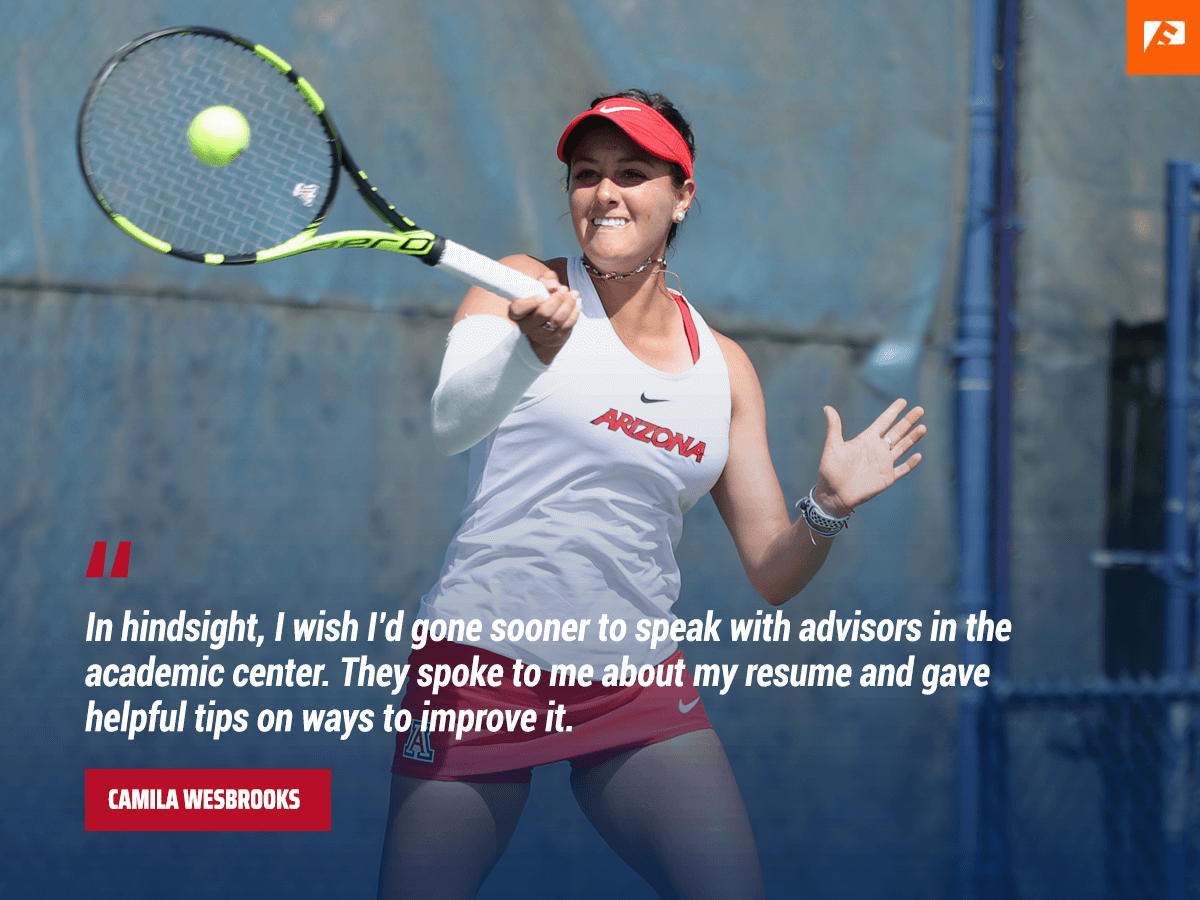 My transition from collegiate athletics into everyday life has been difficult to overcome. Knowing that I will be going from 100-to-0, in the short period of three months.

After I undergo the second surgery, I will not be able to walk normally for two months. The doctor said that it would be a full year before I can do “normal” things again such as playing tennis. In reality, yes, I’m having a hard time accepting my circumstance. I won’t be able to play tennis recreationally, nor will I be able to work out without caution.

My goal is to seek alternative methods of staying productive in my fifth year, as I slowly get over a major time in my life.

The only advice I can share to new student-athletes who are in the same situation, or will be, is to take advantage of all the resources your school has to offer.

In hindsight, I wish I’d gone sooner to speak with advisors in the academic center. They spoke to me about my resume and gave helpful tips on ways to improve it. I also think it’s super important to develop relationships with those who help you along the way.

Attending career fairs and finding summer internships are important to show that you are capable of doing more than just your sport. Interviewing with different companies, I realized that the fact I was a collegiate athlete set me apart immediately. But I didn’t want to oversell it, which becomes difficult after multiple years of dedication to a sport. I think it’s possible to talk too much about your sport.

I think it’s important for employers to know that there’s more to you than what’s on the surface. In my case, that I am not solely defined by my years as an athlete, but as a dedicated individual who picked up a few extra skills along the way. Effectively expressing strengths you’ve acquired, as well as what you’ve learned as a student-athlete will be critical in improving not only yourself but also your abilities to find jobs.

No matter what your current situation is at this moment in time, keep in mind that you are on your own path, not anyone else’s. It’s important to not compare yourself with where your friends are, but to stay centered and own that you are where you’re meant to be.