Back in middle school, teachers would often ask us kids what we want to be when we grow up. Most wanted to be firefighters, doctors, or nurses. I, however, wanted to be a hockey player.

My desire to be a professional hockey player came from attending New Jersey Devils games with my dad and NHL legend Bill Guerin, who is now a close family friend. Occasionally, Bill would throw a game puck over the glass for me to catch. You should have seen the smile on my face. But it is not only because of Bill and the Devils that hockey became my everything.

When I was five years old, I watched Michigan win the national championship on ESPN. Ever since, my dream was to also play for the University of Michigan one day. Granted, it was really Michigan’s helmets that fascinated me at that age but who cares, right? For me, that was all it took. From that day on, all I ever wanted to be was a Michigan Wolverine.

Fast forward to today, I can say that I lived up to my childhood aspirations. Not only did I compete for Michigan, I also signed an NHL contract with the St. Louis Blues and played for the Chicago Wolves, the Missouri Mavericks, and the Tulsa Oilers. Now that I’m retired, I want to reflect on my hockey career and hopefully educate, inspire, or delight some of the readers along the way.

So, in the first part of this series, I want to talk about my early hockey days and my intricate journey to Michigan and beyond.

Ever since I watched Michigan on TV, hockey consumed my life. To the chagrin of my mother, I dedicated everything to the sport. She was feeling like I was missing out on my childhood. As a teenage boy, I skipped birthday parties and social gatherings, woke up at 4 am to take lessons before school, and shot pucks after school. Everything I could possibly do to advance my hockey game, I did. Hockey was my job and nothing could keep me away from the sport. In school, people started calling me “Justin, the hockey player”. It had a special ring to it. And I loved it! 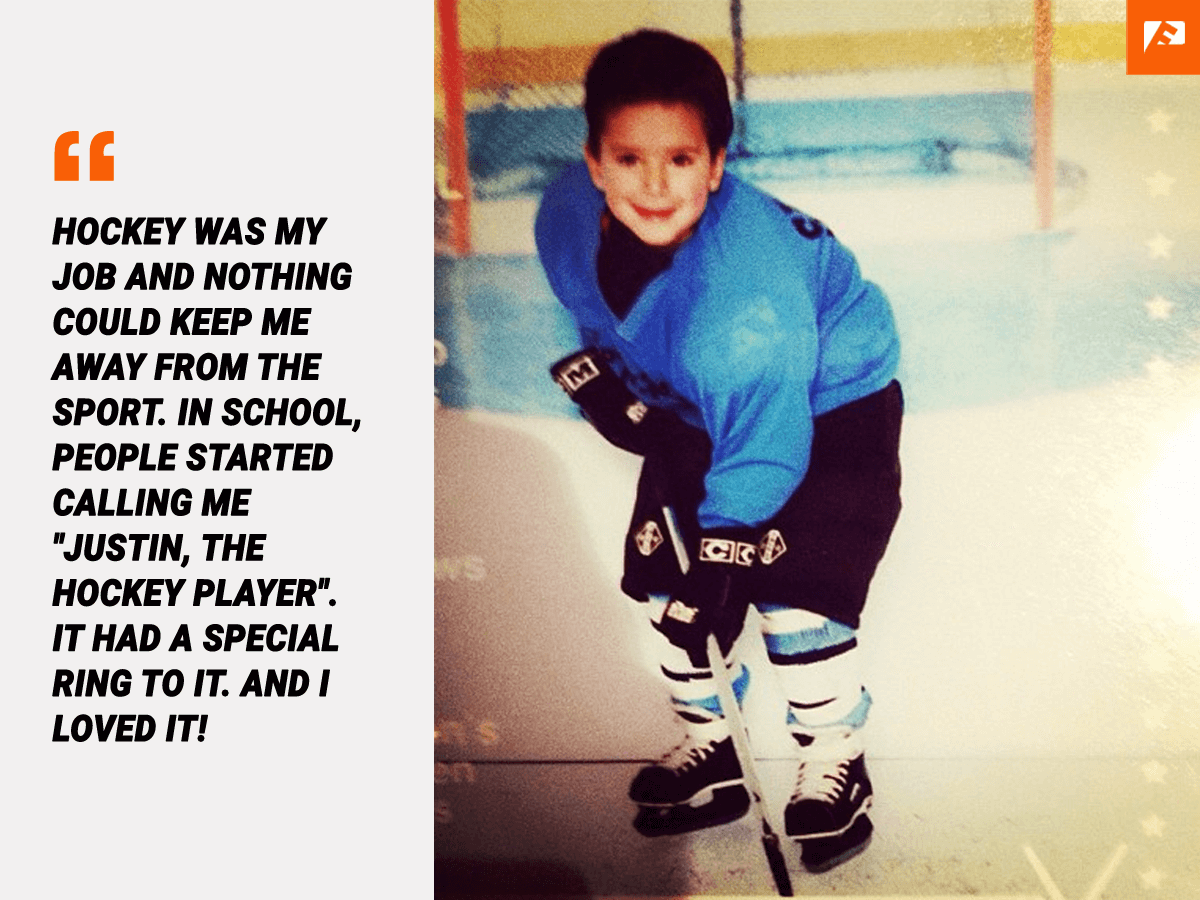 Hockey Is A Different Sport

But pursuing a hockey career is very challenging for a variety of reasons. The hockey trajectory, for example, is very unique compared to other sports. There are numerous different avenues that all impact your future path differently. As you can imagine, having many options creates a lot of confusion and perplexity. Some avenues, for example, could jeopardize your college eligibility and you have no idea until it’s already too late. Therefore, it is fundamental to educate yourself and know what you are getting into.

Luckily, there are agents (that often call themselves advisors) that mainly start to work with you around your freshman and sophomore year in high school. I remember trying out for the New Jersey district team when an agent approached me. After he saw me play, he came up to me and my dad, invited us to dinner, and told us about his connections to Michigan, New Hampshire, and other prestigious hockey programs. Remember, at this time, all I ever wanted was to play for the University of Michigan. So, I was hooked right away.

A few weeks later, I was drafted by the Peterborough Petes. The Petes are part of the OHL which is the major junior league in Canada. In order to not lose your collegiate eligibility, you could only join their tryout camp for two days. Which is exactly what I did. Apparently, I made a good enough impression that their coach offered me to play for the team. Right along guaranteed first-round NHL picks. For someone that aspired to pursue a professional hockey career, this was a very intriguing argument.

But at the same time, I got also drafted by the Des Moines Buccaneers which is a team in the United States Hockey League (UHSL). Playing in the USHL would raise my odds of playing at a Division I school. And as you all know by now that my dream was to play for Michigan, my decision was made quite quickly. So, Iowa, here I come!

I packed my bags and moved to Des Moines, Iowa. I was living with this older lady named Barb who had been housing kids for the past 40 years of her life. Unfortunately, Barb passed away last year but her hospitality and support towards a total stranger will always fascinate me.

When I was 17 years old, I received the phone call that I was waiting for my whole life. It was Michigan’s then assistant coach, Billy Powers. He asked me to come for a visit so I flew out there and was just absolutely mindblown by everything. The facilities, the football stadium, the campus, the academic standards… Everything was state-of-the-art. I remember sitting at PF Changs when Billy called and I wanted to commit right there but was adviced to wait a few days. But in all honesty, it was a no-brainer. A couple days later, I gave my verbal commitment.

Although it was only a verbal commitment at that point, this decision elevated my dedication to the sport even further. For the first time ever, I really felt like something was settling in. Hockey comes with such a fast-paced lifestyle that nothing really ever lasts. This time, however, I had something to hold on to right in front of me.

The Difficulties Before Michigan

So, here I was. Committed to Michigan, yet I had two more years of high school. I played a great first season with the Buccaneers but unfortunately didn’t get along very well with my head coach. He more or less tried to convince me that neither my family nor my girlfriend cared about me and that hockey is all I have. I would score two goals in a game and he would scratch me from the starting lineup the next one as he wanted to “prepare me for the real world of hockey”. For a 17-year old, these experiences were quite devastating. Long story short, his mental games pushed me away. As a result of these differences, I was traded to the Sioux Falls Stampede. Once again, I was packing my stuff and said goodbye to Barb. Sioux Falls, here I come.

At Sioux Falls, I moved into the basement of a very Christian family. Unfortunately, this living arrangement was not as pleasant as my previous one as my faith seemed to offend them. You see, I was raised Jewish and when I shared this information with my guest family during our first dinner, they dropped their forks as if they had seen a ghost. From that point on, I would find dinner or breakfast in the kitchen but I was always eating by myself. They were good people and I’m very grateful for their assistance, but it was a challenging time, to say the least.

On the ice, however, things went quite well. In my last season prior to Michigan, I scored 11 goals and 23 assists in the 59 games that I played. I was in great shape and ready to start the chapter I have been waiting for all my life. It was now time to say goodbye. I literally could not wait to become a Wolverine. It’s hard for me to describe the excitement but if you ever achieved something you worked on your whole life, you can probably relate.

So, here I was again. Packing my bags for the third time. Michigan, here I come.

Also, thank you to Michigan Photography for allowing us to use their photos.