If someone would have told me five years ago that I would end up playing professional soccer in Europe, I don’t think I would have believed them. But here I am, finishing up my second season playing professionally in Poland. And looking back, I am still in awe of the accomplishments and experiences I have made here.

In the past two years, I’ve been able to travel to a number of new countries, such as Sweden, Croatia, and Portugal. My team back then, Medyk Konin, qualified to the 16th round in the Champions League, where we played Olympique Lyon. They were the reigning European champions and the top globally ranked team. They demolished us but having had the opportunity to play against some of the greatest players of our generation, and a team at the highest level, was a once in a lifetime experience. I even had the opportunity to travel and play with the Polish national team for World Cup qualifiers.

Although I’ve had a successful professional career, reaching this stage was not easy for me. At times, I was filled with doubt, during my freshman and sophomore year playing at Duke University. I found myself in a downward spiral of negativity.

I’ve never told anyone this, but I cried the moment I got off the phone with Robbie Church, the Head Coach for Duke’s Women’s Soccer, after making my verbal commitment. The tears weren’t from happiness. The moment I hung up, I felt a rush of emotion. Mostly of doubt, fear, and uncertainty. I turned to my mom with tears in my eyes and said that I made the biggest mistake of my life.

It wasn’t that I didn’t want to go to Duke. I truly believed that Duke was my dream school. It was the perfect combination of high-level academics and a competitive athletic program. Duke was exactly what I was looking for in a University. When I took my first step on campus during my unofficial visit, I felt at home walking along the Gothic-style chapel and campus buildings. To tell you the truth, it was mostly due to the fact that it reminded me of Hogwarts.

But I was crying because I didn’t think I could play at Duke. Earlier that year, Duke was one of the National College Cup finalists. The team was consistently ranked top-five. And the other girls who were part of my incoming class already had impressive soccer careers, having played with their National and Regional teams for several years.

I, on the other hand, did not have those impressive records. Though I saw myself as a good player on a successful team, I felt like a nobody in comparison. I went into my first season at Duke immediately believing that I was lesser of a player. A fabrication of my own conception that impacted my first two years at Duke, until I learned to shut it off. 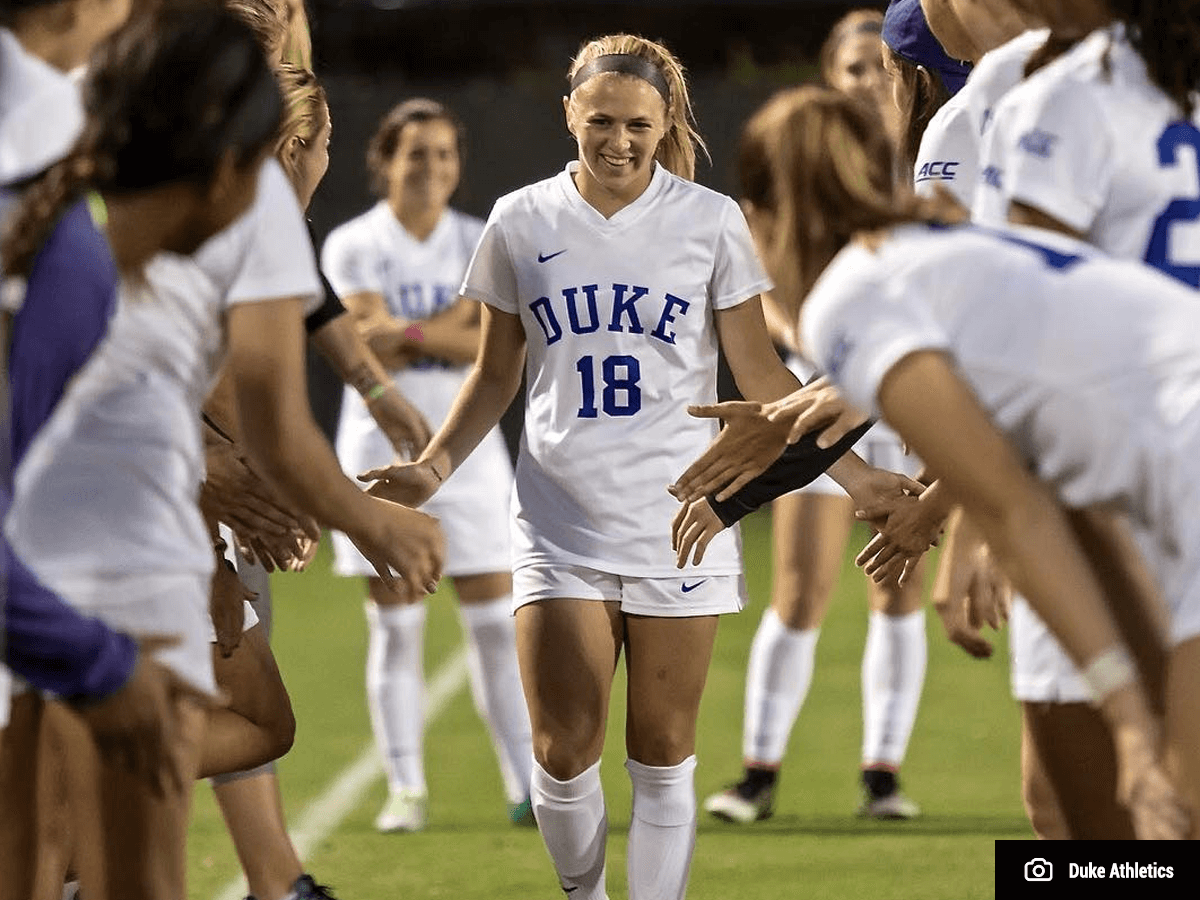 Throughout my time at Duke, I was not a starter, further proliferating my doubts. I struggled with confidence and recognizing my value to the team. I told myself that I wasn’t good enough to play soccer. That my role on the team was meaningless because I didn’t have a starting position. I often felt disconnected to our team’s successes, because I felt that I played no part in earning them. And though during my time at Duke I never, per se “gave up,” I always assessed my own soccer success with how much playing time I was getting.

It wasn’t until my junior year that I was able to cope with these feelings. Realizing that despite not being a starter on my team, I could still be a leader and have a successful future with soccer. I owe this shift to learning to share and be open about my feelings of doubt. I started to confide in my teammates about the different thoughts that passed through my head. And I decided to make one of my goals to help some of the younger players, who were in a similar position as me with their own insecurities in the sport. It was through open conversations about doubt, that my own doubts about my abilities ceased.

I realized that my teammates didn’t perceive me in the same way that I had perceived myself. I learned that my teammates respected my dedication. My energy, in both games and practices. The way I supported and sympathized with different players. My honesty, optimism, and quirkiness. My teammates viewed me as a fundamental part of the team and a leader.

Feeling doubt is something athletes have to fight with throughout their athletic careers, yet it is an aspect of sports that is often overlooked. In order to be an elite athlete today, confidence is a requirement. In many cases, we are expected to be cocky or conceited, just look at Neymar or Ronaldo.

In truth, talking about our insecurities is taboo in the athletic world. Our outwardly confident behavior is often a façade used to mask our doubts. But almost every athlete experiences doubt, especially players that don’t see much playing time. These thoughts consume us because we judge our worth from how we play. Yet, we tend to either bury these thoughts or pretend they don’t exist in fear of not upholding the confident athlete “stereotype.”

The athletic community needs to stop turning a blind eye to the existence of “doubt” because it is present in every single athlete. And we, athletes, need to face it in the eye and feel comfortable with openly discussing it. Only through my acceptance of doubt; did I fall back in love with soccer. Believing that I belonged on the team, made me play with more confidence because I no longer had to lug a gigantic chip on my shoulder. I had more vitality and rigor, both when it came to playing, and when it came to cheering my teammates on the sidelines. I began imagining a future with soccer after Duke and later signed a professional contract in Europe.

Without changing my mindset, I would not be fulfilling the childhood fantasy I always had to play professional soccer. However, that doesn’t mean I am now free of the insecurities that I had before. Sometimes those feelings creep back, especially when I make a mistake on the field. But like I did in college, I have to constantly remind myself that I ‘do’ belong on the field.