Tennis has been a constant in my life for the past eight years. While I had always loved the sport, why I am playing it has drastically changed on May 17th, 2017.

On this day, I woke up in the middle of the night to the screams of my mother. She was crying and clearly, something wasn’t right. When I saw her, she told me that my cousin had passed away. I was in complete shock. What the hell is going on? Why? I couldn’t wrap my head around it.

Later that day, I was sitting next to my brother at my aunt’s house and told him that from now on, I am going to play tennis for my cousin, Beto.

You see, Beto was very special to me. Our relationship was such a unique and close one. We played tennis together. We would watch movies together and order pizza. No matter what we did, it was always a real joy. He made me feel so important. He was a couple of years older than me and while he could be doing other things, he dedicated so much of his time to me. I loved him very much that I felt like I didn’t need to say it out loud, it was too obvious. He made me laugh like no one else. Every time we were sitting on the couch, he would look at me, make a cute face and ask me to play with his hair. I couldn’t say no. He loved it. I admired him. He was such an amazing guy who deserved the world.

One week after he passed away, I was playing a national tournament and beat a girl I never thought I would. During the whole match, Beto was on my mind. I couldn’t stop thinking about him. I fought harder than I ever had and something changed that day… 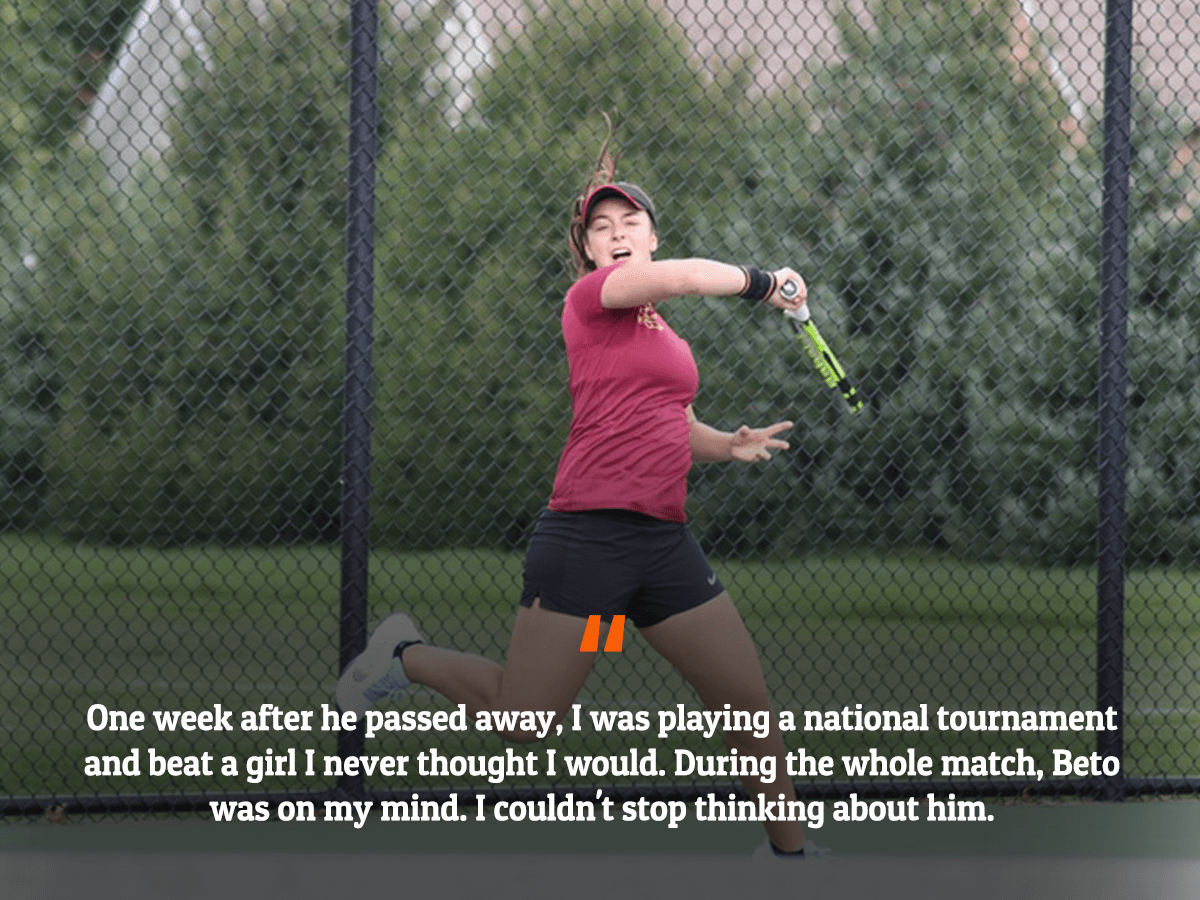 College Tennis in the US

A few months later, I was leaving Brazil and moved to the United States to start my college career.

But my new life in the US wasn’t easy at first. I had no family with me, didn’t have many friends early on, and I wasn’t happy with my tennis game either. In the spring of 2018, my first official season, I wanted to throw in the towel. I wasn’t playing well, struggled in school, and things just didn’t click. But I also knew that I couldn’t give up. Not after everything that went on with Beto. He fought hard against his depression and I needed to fight hard against my struggles as well. With time, I realized that winning didn’t mean that much anymore. What was actually important was how I felt, and how hard I tried.

I ended up playing a pretty good season actually and even earned the “Freshman of the Year” honor in our conference. Of course, I was happy to see my hard work paying off, but mostly, I was hoping that Beto was watching me. And that he was proud. I got his name written on my racket, and a bracelet with the words “Beto” and “Fight”. Reading his name always gave me a little bit of an extra push in matches.

As things continued to be challenging, however, it was time for a change. As a result, I transferred after my freshman year to Walsh University. And I’m incredibly happy there.

READ MORE: “The Magic Of Being A Student-Athlete” by Chris Patzanovsky | Memphis Tennis

Some nights, I couldn’t sleep, wondering if I could have changed things. Some practices, I was frustrated because I couldn’t go back in time. Some matches, I was mad and upset because I thought I wasn’t fighting enough. All the time, I would overthink things and my mind wouldn’t stop running. I was never completely rested. But I knew I couldn’t give up. I fought for him, and I fought for myself.

For a long time, I thought that the only way to make him proud was to win. Why though? He didn’t win, no one always wins. What matters is how we fight. Since May 17th 2017, I play for Beto. I play for my amazing, beautiful, and funny cousin. He lost his fight, so now, I fight for the both of us.