My college volleyball career is over. The University of Kansas (KU) gave me a college experience that I could’ve only dreamed of. Besides personal accolades and record-breaking team success, Kansas Volleyball has given me some of my best friends and allowed me to make priceless experiences. Nonetheless, there were many challenges along the way. Truthfully, I believe that every challenge prepared me for my future on and off the court.

The biggest of these many challenges came after my freshman season at KU. We had just finished our season with a loss in the first round of the NCAA tournament and were saying our goodbyes to two seniors that both played huge leadership and athletic roles on our team. This also meant that we needed to fill a hole in our starting lineup. This hole was in the right side position. At that point, we didn’t have anyone on our roster that could play that position which meant that someone had to make a switch. I’m sure you can guess who the lucky one was.

I was recruited to Kansas to play middle blocker and had played this position for three years prior to my time at Kansas. I’d never played right side before. My coaches brought me into the office for our post-season meetings and explained to me how they thought I would have a really great opportunity to excel in this new position. I’ve always loved challenges and told my coaches that I would do whatever it took to help my team. But in all honesty, I was very nervous and slightly hesitant about learning a totally new position this late in my volleyball career.

With the beginning of the 2015 spring season, I saw myself play on the right side. This also meant playing in the back row which is something that middle blockers tend to struggle with. I was no exception to this. I came to practices early and stayed late. Just trying to get the basics of the position right. Things such as the timing of my hitting approach or learning simple defense drills like passing free balls were challenging.

That same spring, our team had the amazing opportunity to experience a 10-day European tour where we were able to see the world and play volleyball at the same time. A dream. That trip was probably one the main reasons for our team’s success because it gave us a lot of time to form personal bonds off the court but also an opportunity to compete before the pressures of the real season came in August.

I continued to work at my new position all summer with the help (and patience) of my teammates and I was starting to get really excited for the sophomore season to start. When pre-conference finally came around, I didn’t start off too hot. I couldn’t find a rhythm and started doubting myself. I just wasn’t performing the way I was in the spring/summer. It was frustrating to say the least.

I remember a conversation I had with my dad after probably one of my worst college performances when he said:

We won’t grow if we don’t fail, fall, and get up again. You can’t control everything that’s happening to you but you can control how you react to it. You know what you’re capable of and you’ve worked hard to get there. The time is coming.

Yeah, my dad is a pretty smart guy. So I kept working on it. I just took it one day at a time. One play at a time. Slowly, I started to gain my confidence back.

History In The Making

Our team finished the pre-conference schedule with an undefeated record for the first time in program history. Little did we know that this was only the beginning of an unprecedented season. We continued to win. And win. And win. Not only were we winning, but we were kind of dominating. No team has taken us to five sets all season and we only played four sets a handful of times. Everything just clicked and was coming fairly “easy” to us. We made it all the way to a nation’s best 19-0 run before falling to the reigning BIG12 champion, Texas.

At the end of conference play, we were sitting at second place in the BIG12 with a program-best 27-2 record to start post-season play. Once again, we had no idea that there was still so much more to come.

Our first round match of the NCAA tournament was against Furman. A win there would give us the opportunity to play in a huge rivalry matchup against Missouri for a ticket to the sweet 16. It felt like we were writing our own movie. With the sweep of Furman, we were prepared to play the biggest match of the season (so far).

The day of the game was electric. You could just feel that everyone was locked in and we all knew just how important this game was. Not only for our team but the entire state of Kansas.

We started the match with a strong 2-0 lead but Missouri fought back in the third set and was up 23-17 in the set. Then, the unthinkable happened. Our junior serving specialist Maggie Anderson goes behind the service line and serves 5 straight lasers to bring the score to 23-22. I’m getting nervous. There was little to no room for error. We win the point and its 23-23. I sub in and we’re two points from the sweet 16. We played the most perfect two points of volleyball I’ve ever seen. I can clearly recall getting the last kill of the game and it was a feeling I honestly can’t put into words. The rest of the team sprints off the bench and rushes the court. The crowd is going absolutely insane. Kansas Volleyball swept Missouri and we’re headed to the Sweet 16 for only the second time in program history.

A few days after our match against Missouri, the 2015 All-American awards are being announced. My head coach calls me into his office and my best friend/setter Ainise Havili is also in the office. I thought we were in trouble for something. But coach tells us that we were both selected as First Team All-Americans. I kind of just looked at him because I didn’t really believe it. Being an all-American was something that I had always dreamed about in high school. Going to the sweet 16 was rewarding enough but being named to the First Team was truly an honor and I was so grateful and lucky to be sharing that moment with my best friend.

Wait, We Are Not Done Yet

So now, we’re headed to San Diego for the Sweet 16 match against Loyola Marymount (LMU). We had about a week to prepare and when the day of the game came, we were once again just all locked in. Ready to extend our season another day. A win against LMU meant an opportunity to play either Creighton or USC who was #1 for almost the entire season.

This match wasn’t nearly as intense as the one against Missouri, but we beat LMU in 4 sets and advanced to the Elite 8 for the first time in program history. USC also defeated Creighton in 4 sets. This meant that we were competing for a spot in the final 4 with the number one team in the nation. I think it’s safe to say that we were the underdogs in this matchup.

The Best Day Ever

So, let me talk about the best day in my four years at KU (and arguably the best day of my life). The day of the USC match. I remember everything was a bit more tense than usual. We were all nervous but also super excited. There was significantly less pressure on us than there was on USC. At this point, we had nothing to lose. We had already made history. We had done the unthinkable so many times so why not do it one more time? We started the match up 2-0. I couldn’t believe it. But before I knew it, we were tied 2-2 and down 13-9 in the 5th set. It looked as though our season was coming to an end.

Coach called the timeout at 13-9 and we all looked at each other in the huddle. Although none of us really said anything, we all just knew that we had more in the tank. Our team trip to Europe, all those long practices, the days when we wanted to quit but didn’t… Everything had prepared us for this moment. Our season wasn’t over. We still had something to prove. 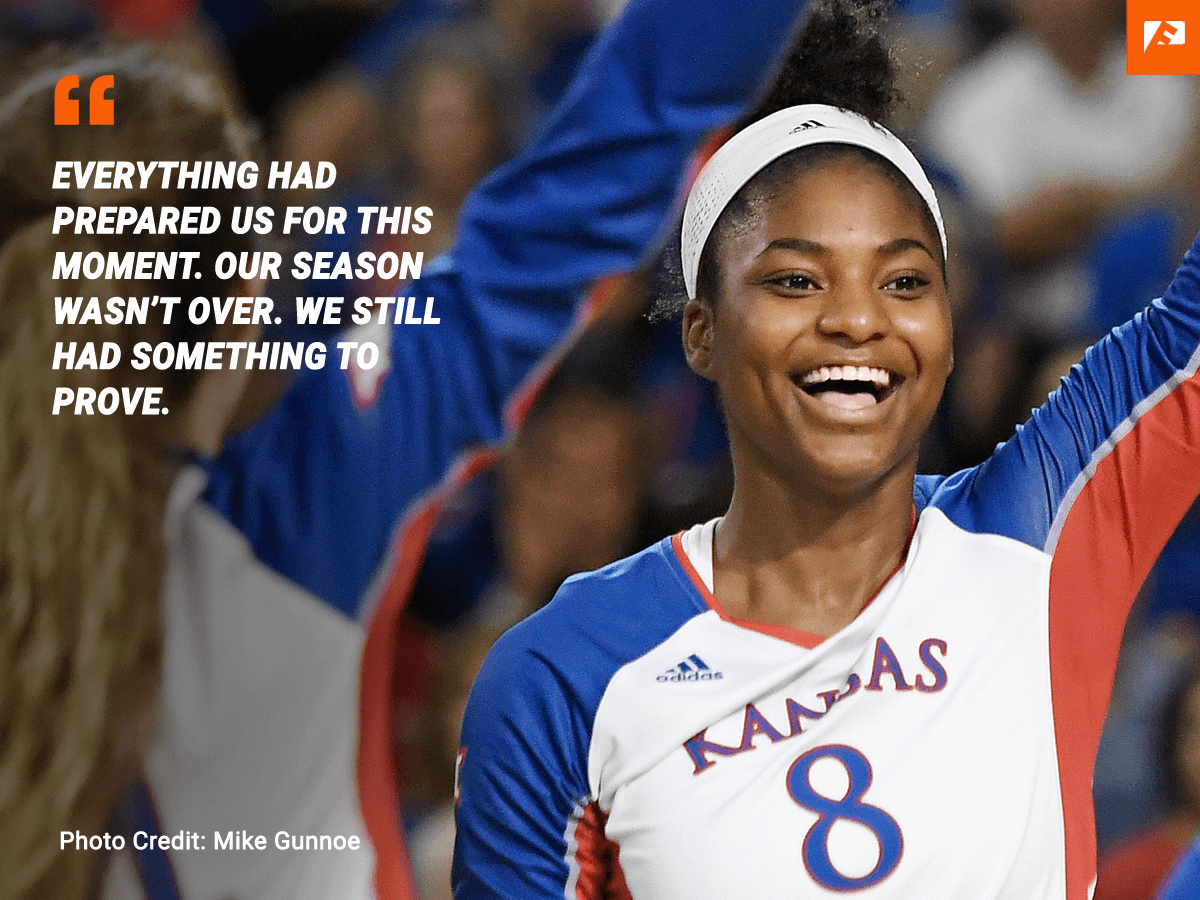 What happened next was something that I wouldn’t believe if I didn’t experience it firsthand. Our libero Cassie Wait hits four amazing serves to tie up the game. 13-13. Next thing I know, its 14-13 and we’re one point away from upsetting the number one team in the country and securing our spot in the final 4. The final point of the game felt like it lasted for 10 minutes. The ball had to have crosses the net like 1,000 times. Both sides are playing amazing defense. The ball just isn’t hitting the floor. Cassie Wait has the dig of the century and finally, our outside hitter Madison Rigdon, sends the perfect attack into the deep left corner and its over.

We did it. We won. Immediately, we all fell to the floor and the rest of the team piles on top of us. We’re all crying and laughing and screaming and sweating and just about every “-ing” word you can think of. Our parents are in the stands absolutely losing their minds. No one can believe what just happened. But one thing was for certain. This is a moment that we’ll remember for the rest of our lives.

That night in San Diego, I remember not being able to fall asleep as I was too excited. And I just thought to myself:

If I ever have a moment of doubt, or wanted to quit, just remember this day, Kelsie.

In the Final Four, we played against the Cornhuskers and although we lost in four sets, it was the experience of a lifetime. I felt like a celebrity. Our bus had police escorts and we played in front of a record crowd of over 17,000 fans. It was truly a dream come true.

After the last match of the season, we all just sat in the locker room and cried. It was a mixture of sad and happy tears. We had just finished the best season Kansas volleyball has ever had. With a final record of 30-3, we put our program on a national level. We did what no one thought we could do and best of it all, we had a blast doing it. The season could have not gone any better.

My Time At Kansas, You Ask?!

So when people ask me: “How was your time at Kansas? How did you like Kansas? Do you miss Kansas?”, I can’t even begin to explain my experiences without taking up an hour of their time. To put it simply, it was a dream. I feel like the luckiest person in the world to have attended such a great university, play the sport I love, and got to hang out with my best friends while doing it. I can’t thank my teammates, coaches and the Jayhawk fans enough for letting me live the college athlete dream. It was easily the best four years of my life and despite all the personal struggles, setbacks, and challenges, I would do it all over again in a heartbeat.