When I began recruitment for collegiate rowing, I was slated for smaller DI programs. I was short, with a slightly above average erg scores, but had lots of potential. The University of Texas at Austin had not been recruiting me as their strategy was to focus on the well-established, top tier of high school athletes. However, I got lucky.

The summer before my senior year, UT hired Dave O’Neill, who had tremendous success at another university. Because he was new and wanted to connect with local talent, I was signed with his first recruiting class. I knew this was a risk. I was going to be a small fish in a big sea and might not make the racing team. However, if I did I could be a part of something great that would allow me to reach my full potential as a rower.

I was ready to go to work.

The Beginning of my Downfall

During my freshman year, I obsessed about out-working everyone else, training an extra five hours a week by myself – running ten miles on my days off and adding cardio sessions before workouts. These helped me reach the varsity 4+ for my first Big 12 Championships, exceeding all expectations for the short girl who was barely recruited.

Unfortunately, two weeks later, my high level of training resulted in exhaustion and I was the last person cut from the championship squad. I watched my team finish 8th from the couch at my parents’ house.

What began as extra training during my freshman year became seriously unhealthy behavior.

I was working out more than ever, eating less than ever, and setting ridiculous standards for the year to come. That fall, I came back fit, but mentally unstable. My extreme anxiety about “failing” again resulted in my downward spiral.

I was hardly going to class, isolated myself from everyone, and pushed out anyone who tried to help. I had panic attacks after tests and dreaded going to practices. I hit rock bottom in December, barely finishing a workout, which resulted in being left off the winter training trip. After a push from my roommates, I began therapy.

I am lucky to be part of an athletics program where mental health services are easily accessible. I was able to connect with a therapist who worked with other athletes and was able to uniquely understand my struggles in conjunction with sports.

Through therapy, I learned about my depression and anxiety. I started medication and continued to see a therapist. As the months progressed, I got a good grasp on how to fight back and win the battles my mind was playing.

As my mental health improved and my love of rowing returned, I found myself stroking the varsity 4+ for the majority of the season. However, I was still trying to figure out my new normal and who I was when I wasn’t being controlled by my anxiety.

The 4+ lost every major race we were in. When the time for lineups for the National Championship came around, I was again left out, watching my teammates and the 4+ earn a 4th place finish from my couch. 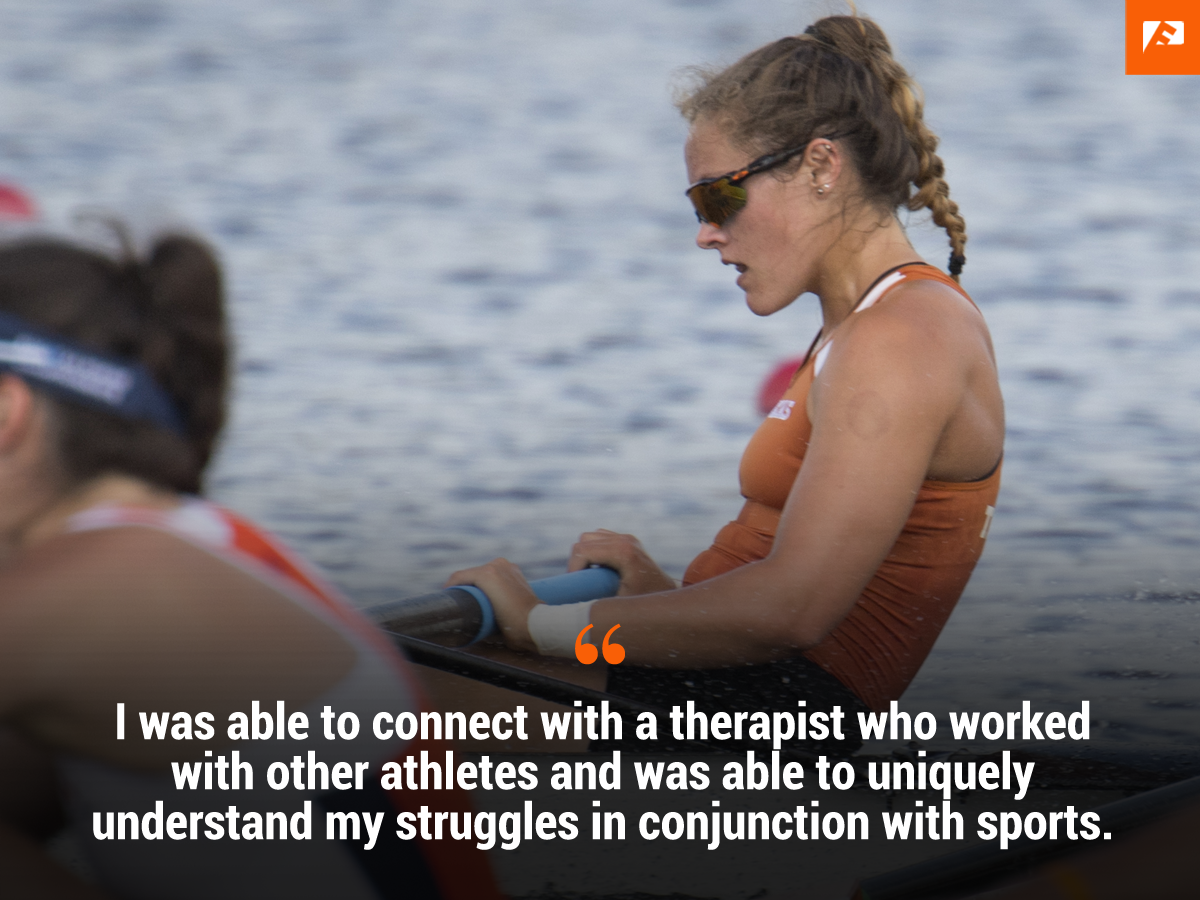 This summer was different though. I decided that I was not going to repeat the previous summer habits. I was not going to give in to my anxiety. I was going to fight to be healthy. I cut six inches off my hair, rescued a cat, and got a tattoo – “Nevertheless, she persisted”.

The tattoo was my turning point. It was a constant reminder to keep going, to not give up or give in. It was my war cry.

I spent the summer traveling around Europe. And working out was not a priority. I took a mental break from everything. While I was not in the best shape physically, I was in the best shape mentally. The months passed and I trusted my coach Dave and his process of training.

When I found myself not on the traveling squad when the first regatta came around, the thoughts that dominated my sophomore year came back; anxiety and fear. But, I kept going.

That next Saturday at practice, in the boat with my other homebound teammates, I found myself smiling and laughing. I was okay; it was okay to not be there. It was one of the most joyful practices I have ever had.

After that first regatta, I was in the 4+ for every race after. I never felt safe in my position or certain of my future, but I enjoyed every minute and let the events unfold as they would.

On May 26th 2018, I raced the 4+ to a 4th place boat finish and helped UT finish at a record high 3rd place at the National Championships.

After my race, Dave hugged me and told me how proud he was. I had finally made it – not by training harder than everyone else, but by trusting the coach and his process and accepting that my best was good enough – whatever the outcome.

College is a place where your strengths are tested and your weaknesses revealed. As a collegiate athlete, you are constantly challenged both mentally and physically in every aspect of your career. Getting help for my mental health made me stronger. Every struggle I’ve had has helped me grow into the person I am today and I am so thankful for the people I’ve had around me that have been patient and supportive in my self-discovery.

And “Nevertheless, I persisted”. Maybe I wasn’t such a small fish in the sea after all.